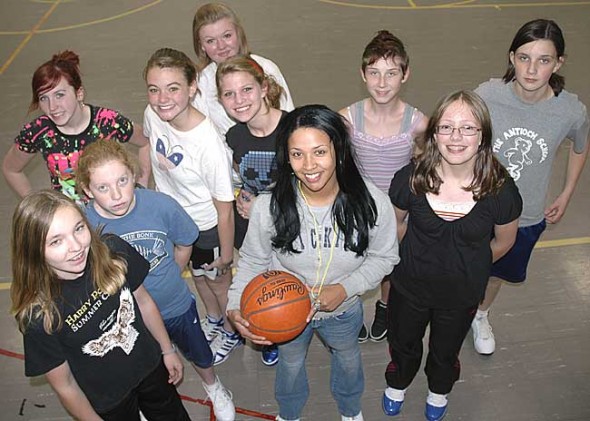 The top female basketball scorer in Yellow Springs High School history, Evin Wimberly, class of 2005, is returning to coach the McKinney seventh- and eighth-grade girls basketball teams this year. The former point guard, the only Lady Bulldog basketball player to score more than 1,000 career points, takes the helm as head coach of a team that did not win a game last year.

“I thought it would be a good first step when I got out of school,” said Wimberly, who last year graduated from Central State University with a degree in psychology. “I like being back involved in the school.”

Wimberly is currently seeking a graduate degree in family and child studies from Miami University, with hopes of working with youth in the juvenile court system.

At the teams’ first practice several weeks ago, Wimberley asked the 16 girls about their goals for the year. They said they hoped to win at least two games and improve their shooting, dribbling and lay-ups. Wimberly plans to teach the girls the basics, help them get in shape and instill an ethic of hard work.

“They’re saying we run too much and keep asking to play,” said Wimberley of her team. “Some never got used to just doing drills — the fundamentals. I don’t want to come off mean.”

Wimberly herself was no stranger to hard work. She started her basketball career in sixth grade as a member of the boys team, started on the varsity team all four years of high school, played for an Amateur Athletic Union team that went to nationals and went on to play three years of college basketball at Central State on a scholarship.

At Yellow Springs High School she received the Ohio High School Athletic Archie Griffin Sportsman Award, was voted one of the top five players in the Dayton area, and was named to the Metro Buckeye Conference first team, the All-Southwest District team and the District 15 all-star team. She ended her career with more than 1,700 points, a school record.

The first home game for the seventh- and eighth-grade girls basketball teams is Saturday, Dec. 11, starting at 9 a.m. in the high school gym.

Wimberly, who describes herself as competitive, said being an alumna of the Yellow Springs basketball program will help her lead the team.

“I connect with them because I’ve been where they’ve been,” she said.