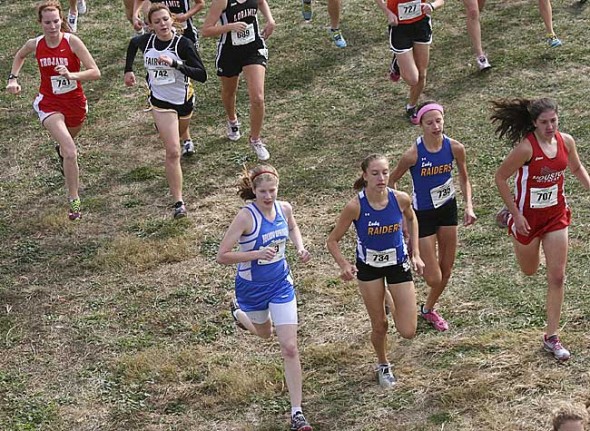 Lois Miller finished 43rd at the State Division III cross-country tournament on Saturday. Here, at the regional championship on Oct. 30, Miller ran her personal best time of 19:44 to qualify for the state tournament. (submitted Photo by Talia Boutis)

Yellow Springs High School’s Lois Miller, who placed 43rd at the Division III State Cross Country Championship last Saturday in Columbus, is already thinking about next year’s race. Despite finishing with her second-best time ever and in the top 30 percent of qualifying runners, the sophomore wasn’t overly thrilled with her performance.

“It was a great experience for next year,” Miller said. “I’ll already know what it’s like and I’ll pace myself better.”

With the excitement of her first state tournament, Miller charged out to a fast start, finishing the first mile in 5:49 in front of 13,000 screaming fans at the Scioto Downs racetrack. Though she slowed down somewhat later in the 3.1 mile race, Miller finished in 19:52, just eight seconds slower than her personal-record run at the regional tournament the week before, and ahead of more than 100 other runners from around the state.

“She certainly gave it her all,” said Miller’s coach, Vince Peters. “She’s got talent and she works hard and so she reaps the benefits of that.”

Peters has been Miller’s coach from the beginning, when as a 7-year-old she ran in the Miami Valley Track Club. Peters has taught Miller how to pace herself by running at a consistent speed, pick out opponents to run with and use the wind to her advantage, among other techniques. Miller said Peters has been “very supportive,” even taking her to Columbus last week to scout out the course.

“My coach Vince is very good technically,” Miller said. “It’s very nice to have someone who I know I can be confident in his ability to prepare me for all the races.” Peters was selected the Metro Buckeye Conference boys coach of the year for 2010.

In addition to her performance at the state tournament, Miller counts among her season’s accomplishments an eighth-place finish at regionals, for which she received the honors of First Team All-Region, a first-place finish at the John Bryan Invitational last month and a seventh-place finish at districts, leading to the First Team All-Dayton honor. She also broke the Yellow Springs High School sophomore record with her lifetime best of 19:44 at the regional meet.

“The goal of this year [for Lois] was to get to state, which she accomplished” Peters said. “She definitely improved, her times this year were faster and she has a lot more confidence in her own abilities.”

In addition to the thrill of victory, Miller enjoys the camaraderie of the cross-country team.

“I really like the team spirit of it,” Miller said. “It’s one of the only sports at Yellow Springs that combines everyone — 7th through 12th grade, boys and girls — and we bond well.”

Miller also runs varsity track and plays varsity basketball, enjoys swinging, jumping on trampolines and going downtown with her friends, and loves to spend time with her family and their two black labs.

“I like Yellow Springs — there’s just a bond between people,” Miller said. “It’s a close community and it’s nice knowing everyone [in the school.]”

Miller was the third ever and the first lady Bulldog since Anita Allen, in 1995, to compete in the state championships. Swala Abrams, in 1984, has the top female finish in school history at the state meet, placing 31st, according to coach Vince Peters.

Miller has two years to mark herself as the top finishing female runner in Yellow Springs High school history. And just days after her state run, she’s already preparing for it.