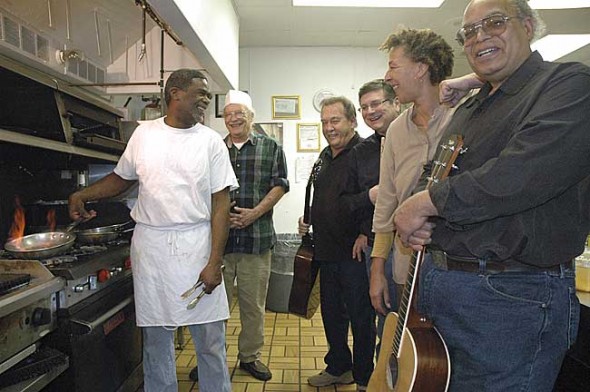 The local band Mack and the Rockets will perform this Friday, Jan. 21, at a “rent party” for CJ’s restaurant, which is having financial problems. The event, which takes place from 6 p.m. until closing at the restaurant, will feature a special Cajun menu. Pictured are, from left, restaurant owners Carl Moore and Jim Zehner and band members, from left, Ed Campbell, L.B. Fred, Ona Harshaw and Mark Crockett. Not pictured are band members Lori Askeland and Allen Knisley. (Photo by Diane Chiddister)

Boogie down to support CJ’s

To keep CJ’s Southern Cookin’ from closing its doors, a local band is reviving the rent party tradition to solicit community support for the financially ailing restaurant. Though business was good at CJ’s after opening last summer, the restaurant has struggled in recent months to get enough customers and without an immediate influx of cash and patrons, will go out of business, the owners said.

Hearing about the crisis, members of Mack and the Rockets decided to organize a community benefit rather than watch a beloved local business close, according to vocalist Ona Harshaw. Organizers hope to raise at least $1,800 for the restaurant to stay open.

“The businesses employ our residents — it benefits the entire community when every building is full,” Harshaw said. “Let’s keep it open so we can keep eating there.”

The party, set to begin at 6 p.m. Friday, will feature the blues and jazz tunes of Mack and the Rockets and a special Cajun menu that includes shrimp etouffee and seafood jambalaya, for $20 per person. Items from the regular menu will be priced separately and served until 7 p.m., and attendees can bring alcoholic beverages to the restaurant, located on U.S. 68 at the south end of town in the building formerly occupied by KFC/Taco Bell.

The rent party tradition dates back to the 1920s, in the overcrowded and overpriced African-American tenements in Harlem, when tenants struggling to pay rent would throw parties and collect a small fee from participants. Food and drinks were often available, and music and dancing would go well into the night. The term “boogie” may have originated in the rent party, according to Harshaw, who said she hopes the band’s honky-tonk blues music brings partygoers to the dance floor.

Money collected at the benefit will help cover CJ’s monthly expenses of rent, insurance and payroll and keep the business open at least through February, according to co-owner Jim Zehner, who cited fewer customers over the winter months and a lack of operating capital as causes of their financial crisis.

In their first time owning a restaurant, Zehner and co-owner Carl Moore opened the business three months later than they expected, which diminished their capital while they paid monthly expenses without bringing in revenue. By the time they were ready to open in July, they faced a difficult choice of abandoning their plans or moving forward with tight finances.

“We could’ve given up or taken a shot at it — we took a shot and we don’t regret it one bit,” Zehner said. “It’s been a great deal of fun — it’s a joyful experience to feed people and have them walking away warm and happy.”

Another challenge for the young restaurant came just two weeks after it opened, when head chef Moore’s appendicitis meant additional help was needed in the kitchen, straining their payroll expenses.

If CJ’s can survive the next few months, Zehner is optimistic that the business can thrive. Kitchen efficiency has been growing and there are plans for reaching new customers with delivery options and more advertising. They are also considering menu changes, though they will keep their most popular dishes — fried and baked chicken, ribs, fish baskets and greens served three ways.

“If you look at statistics on new businesses, it’s hard for them to survive in their first year, and restaurants are the hardest to get off the ground,” said vocalist Lori Askeland. She said CJ’s is important to the community because it is locally-owned in an increasingly corporate chain-dominated culture, offers uniquely regional American cuisine with its Southern menu, and is one of the few African American-owned businesses in town.

Mack and the Rockets has helped other local institutions since it formed two years ago, previously playing benefits for the Senior Center and First Presbyterian Church. Consisting of Harshaw, Askeland, Mark Crockett, Ed Campbell, L.B. Fred and Allen Knisley, they found out about CJ’s troubles when inquiring about becoming the restaurant’s house band.

“We’d been talking about the idea of more social involvement — everyone knows people who are struggling to get by,” said Crockett, a guitarist, who recalled attending rent parties while growing up in Washington, D.C.

In addition to support from the band, Zehner is grateful that community members have helped with advertising and with replacing disposable plastic dishes and utensils with reusable dishware. He urges those who cannot attend the event to support the restaurant by eating there.

“Anybody should feel free to stop by and make a donation, but the best thing you can do is to eat out a lot, particularly over the next couple of weeks,” Zehner said. “Come on in, that’s what makes the difference.”