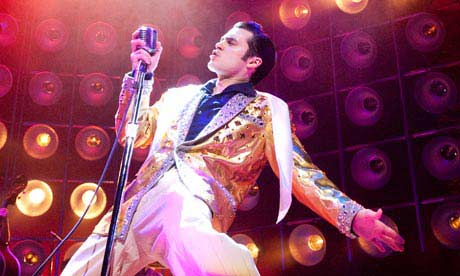 There’s a whole lotta shakin’ goin’ on this year at the Noel Coward Theater in London’s West End, where former Yellow Springs resident Michael Malarkey is playing the part of Elvis Presley in the musical Million Dollar Quartet. The Tony award winning show that debuted on Broadway and has made its way to London is the story of the impromptu jam session at Sun Records in Memphis, Tenn., on Dec. 4, 1956 with rock legends Elvis Presley, Jerry Lee Lewis, Carl Perkins and Johnny Cash. The show features the music the foursome put together that day and features the live performance of over 20 hits, including Blue Suede Shoes, Peace in the Valley, Hound Dog, Great Balls of Fire and Down by the Riverside.

Malarkey starred in many YS Kids Playhouse productions as a youth in Yellow Springs before leaving the village to train at the London Academy of Music and Dramatic Art. His professional stage debut was in Laurie Sansom’s productions of Eugene O’Neill’s Beyond the Horizon and Tennessee Williams’ Spring Storm at the Northampton Royal and Derngate theater in Northampton and the National Theater in London.