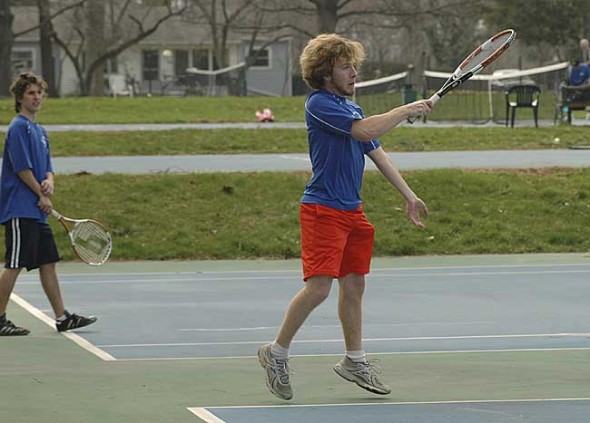 Nick Sontag nailed a forehand return on the second doubles court as he and his partner Quinn Levanthal defeated their opponents from Miami Valley in straight sets. Overall the team lost 1–4. (Photo by Megan Bachman)

Baseball begins with a bang

The Yellow Springs High School baseball team started its 2011 season with a bang. At Catholic Central last Thursday, lead-off batter Robbie Jones sent a long drive to center field that looked like a home run, but ended up as a ground-rule double. The very next play Austin Pence knocked in Jones with an RBI double.

But the Bulldogs’ luck ran out and the team eventually lost 30–1 due to costly defense errors. Strong defensive plays were made by outfielders Carter Collins and Eric Lawhorn, first baseman John Shaw and senior catcher Austin Bailey. Austin Pence opened the season on the mound while reliever Nerak Patterson finished the game for the Bulldogs.

The Yellow Springs tennis team is in the swing of things. After four straight matches last week the Bulldogs are 2–2 (1–1 in the Metro Buckeye conference) after dominant play by its first and second singles players and comeback performances by many resilient Bulldogs.

Captain and first-singles player Addison Pettiford cruised to victory in his first three matches, winning five of his first 6 sets of the year 6–1. On the second-singles court Aldo Duque lost his first set of the year before winning six straight sets over three matches to also begin his season 3–0.

Last week the Bulldogs defeated Fairborn 4–1, with additional wins from third-singles Quinn Leventhal in three sets and the first-doubles pairing of Isaac Haller and Will Turner in two sets. Second-doubles team Nick Sontag and Nick Miller-Jacobson came back to win a second set tiebreaker before dropping the third.

The next day the team lost a closely contested match against Beavercreek, 2–3, with Pettiford and Duque the only victors. Freshman Miller-Jacobson stepped up to cover the third-singles position and had an impressive effort despite losing in straight sets. Sontag and Turner played hard at first doubles, losing in two close sets after putting pressure on the visiting opponents and hustling to every ball. Savita Bathija and freshman Rachele Orme competed in their first match, but were overpowered at second doubles.

In the conference opener at Dayton Christian, the Yellow Springs team swept the singles courts to win 3–2 with Turner stepping into the third singles position and coming away with a strong 6–0, 6–2 victory. Pettiford turned around the first set to win 7–5, 6–1 while Duque maintained control in a 6–4, 6–4 win. Levanthal and Miller-Jacobson joined forces at first doubles, dropping 6–3, 6–3 after a back-and-forth second set. Bathija and Orme at second doubles were unable to take a game.

It looked like the Bulldogs were going to come away with the win last week against perennial conference favorite Miami Valley, but the first two singles players lost in three sets and Yellow Springs dropped 1–4. The second-doubles team of Sontag and Levanthal had a strong win of 6–1, 6–4.

Friday’s match at Greenon has been cancelled.

The Yellow Springs High School softball season has been cancelled due to a lack of players.