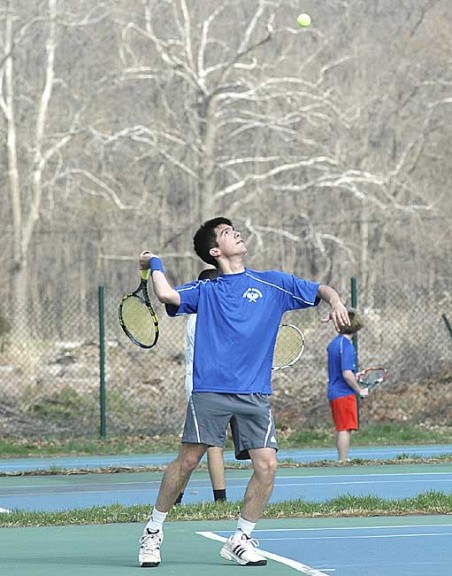 Aldo Duque tossed up the ball for a serve as the second singles player for the Bulldogs in the team’s loss last Friday to Miami Valley. In the background is the second doubles team of Nick Sontag and Quinn Levanthal, who won in straight sets. (Photo by Megan Bachman)

With decisive victories from its singles players, the Yellow Springs High School tennis team sailed to a 3–2 victory over Stivers last week to improve its record to 3–3. On the first court, Addison Pettiford crushed his opponent 6–0, 6–1, while second singles player Aldo Duque and third singles Quinn Leventhal both carved out wins. The Bulldog doubles pairing of Isaac Haller and Savita Bathija on the first court and freshman duo Nick Miller-Jacobson and Rachel Orme at second doubles both dropped their matches in two sets.

Miller’s 2:24.64 time bested his opponents and the record books while the team won the meet clearly with 159 points to runner-up Dayton Christians’ 101, thanks to its dominance in the field events. Also winning their events for the Bulldogs were Ahmad Wagner, with a 5–2 high jump and 25.36 second finish in the 100-meter dash, Kaner Butler, with a 19.12 second time for the 100-meter hurdles and Jacob Snoddy, who pole vaulted to 6–6.

Solid performances by the few McKinney girls runners assured them a fifth-place finish at the meet. Rhona Marion marked 12-feet and 7.5-inches in the long jump to come in second. And the girls 4×100-meter relay team of Marion, Ayshia Allison, Louresha Cheatom and Ashley Longshaw were runners up with a 1:02.07 time.