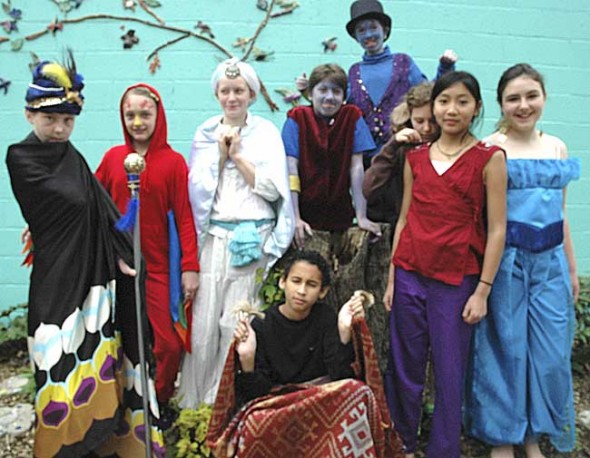 Playing the lead actors in Aladdin, the Antioch School musical next weekend will be, from left, Sophie Schellhammer, Jorie Sieck, Saskia Brogan, Jesse Beard, Landon Rhoads (in back), Ella Comerford, Olivia Brintlinger-Conn and Samantha Bold. In front is Eli Jones. The play will be presented Friday, May 20 at 7 p.m. and Saturday, May 21 at 1 p.m. at the Clifton Opera House. (Photo by Diane Chiddister)

A magical ‘Aladdin’ at the Antioch School

At the Antioch School, things get done a bit differently, and that includes the school musical. As befits a school that advocates a holistic approach to learning, the children are involved in all phases of the production, from choosing the play to picking their character, from designing their costume to decorating the set.

It’s all part of the learning experience according to the Antioch School philosophy, said Older Group teacher Chris Powell in a recent interview.

“The Antioch School is a child-centered school where children are responsible for their learning,” Powell said. “When children have the opportunity to make choices about what they do, they have an intrinsic involvement and commitment.”

This year’s school musical, Aladdin, will be presented at 7 p.m. Friday, May 20, and at 1 pm. Saturday, May 21, at the Clifton Opera House. Powell will direct, and choreography is by former Antioch School student Jade Turner and school mom Pat White.

The production began months ago, when Older Group students (those in grades four, five and six) began considering which play to perform. The process began with brainstorming possible plays, with the criteria that they be suitable for a family audience, have many lead parts, and be accessible. Next, a democratic vote revealed that Aladdin won over the competition.

“It’s a funny play, and it seemed like fun to do,” said Saskia Brogan.

For Sophie Schellhammer, the play won out because it has a lot of lead roles, so many Older Group students could share the glory.

And Ella Comerford chose Aladdin because, “I like all the action. And the magic.”

With the play selection out of the way, kids moved on to one of the more complex components of the production: choosing their character. In most schools, auditions are held and teachers decide who plays who. But at the Antioch School, the kids are responsible for picking their own role.

The sixth-graders, soon to graduate, get first dibs, then the fifth graders, and on down. But then it gets more complicated. If two kids want the same role, as often happens, they decide how to resolve the conflict: one way is to have a different person play the role each night, and another is to draw a name out of a hat, with the loser choosing another part.

So this year, there’s one Aladdin on Friday night and another on Saturday, and likewise there are two genies. It’s a good system, the kids say, because they are given the responsibility to make their own choices. Kids who really want to play a lead part get to do so, while those who don’t can choose something smaller, or do tech work. It’s also more democratic than at most schools, giving more kids a chance to shine.

“Even if you don’t start out a good actor, you learn acting skills,” said Jorie Sieck.

And the roles the kids choose for themselves seem to work out, students agreed, even if they offer many challenges.

“It’s hard, because there are so many lines to learn,” said Lena Bingenheimer, who plays Aladdin. “And, you have to act like you’re poor…act like you’re in love…and, I play a boy.”

Students also create their own costumes, starting out scouring both their own closets and those of their parents before checking out used clothing stores or perhaps brushing up on their sewing skills, as did Sophie to create the black cape of her character, Jafar (the bad guy).

Of course, learning their lines is the hard part, but as of last Friday, most of the kids had mastered their parts.

Putting on a play together is a powerful exercise in teamwork, another focus of the Antioch School. If someone doesn’t know his or her lines, it affects everyone else and undermines the production, according to Sophie.

“If people remember their lines, then we can work together,” she said.

As well as being fun and magical, Aladdin is a play that has things to say, the children agreed. It’s a story about a young boy who presents himself as someone he’s not, and the lessons are many, they said.

“If you lie a lot, the lies can go wrong,” said Olivia Brintlinger-Conn.

“It’s not what’s on the outside, but the inside that counts,” said Landon. “And sometimes people like you for who you are, and you don’t have to be someone else.”