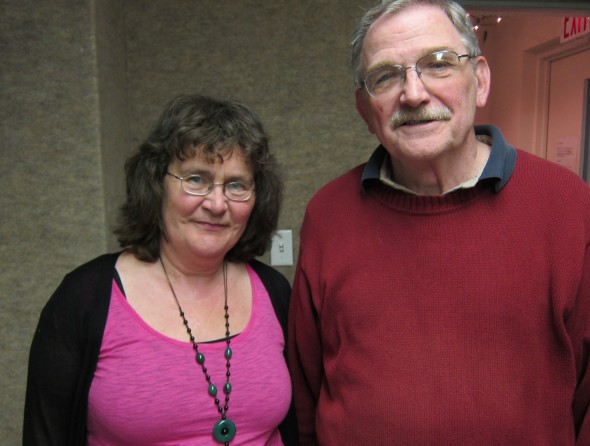 Irish radio producer Mary Phelan, left, traveled to the Miami Valley to meet President Obama's fourth cousin Roger Kearny of Troy, for a radio documentary about Obama's Irish forebears and their descendants in the region.

Two special programs are coming up the last week of May on WYSO Public Radio.

The first is a documentary, “The Road to Moneygall”, about President Obama’s Irish forebears, including a branch of the family that moved to the Miami Valley in the 1800s. It was made by Irish radio producer Mary Phelan, who came to the area in late April to interview descendants of Obama’s ancestors, including Roger Kearny of Troy, Obama’s fourth cousin.

President Obama traveled to the tiny village of Moneygall in Ireland on May 23 to visit the birthplace of his great-great-great grandfather, Falmouth Kearny.

The radio documentary will be aired Sunday, May 29, at 6 p.m. WYSO is the first North American radio station to air the documentary, which was produced for Irish radio.

A new five-part series, “The New Face of Wright-Patt,” will begin on Monday, May 30, during Morning Edition, and will air through the week. The series looks at the impact of the 2005 Base Realignment and Closure Decision, or BRAC, on the base and the entire region.

The series was produced in collaboration with NPR’s “Impact of War” project.