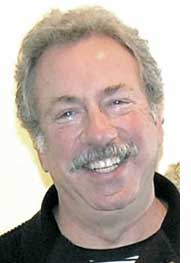 Steve Sturman has been hired by Antioch as its new vice president for advancement. (Submitted photo)

Steve Sturman, the new head fund raiser for Antioch College, sees similarities between the school where he most recently worked, Culver Academies in Indiana, and Antioch College. Both schools are small and old, with aging physical plants. Both have passionate alumni. And both schools see themselves as having a unique approach to preparing young people for the world.

“To incorporate all that into an academic program means developing well-rounded individuals who are prepared for real life,” Sturman said in an interview this week.

On Friday, May 27, Antioch College President Mark Roosevelt announced that Sturman would serve as the college’s new vice president for advancement, heading up the school’s fund-raising efforts.

“Steve is committed to community and to purpose — the notion of making a difference in one’s work — and it’s that sensibility that makes him a good fit for Antioch right now,” Roosevelt said in a press statement. “His work at Culver required that he get to know a specific kind of institution with a particular history and highly engaged alumni. That experience, together with his proven track record in fund raising and sales, will be an invaluable asset as we work to firm up our foundation going forward.”

At Culver Educational Foundation, which includes Culver Military Academy and Culver Girls Academy, Sturman was a senior development officer and part of a team that raised $376 million over an eight-year period. The amount, which is the largest ever raised for a secondary school, was the combined effort of a development staff that began with seven employees and grew to a staff of 30, he said.

Sturman has a long family history with the Culver academies, and both his son and daughter graduated from the schools.

Coming to Antioch College fulfills Sturman’s lifelong dream of heading his own department and having his own fund-raising team that uses “best practices to serve the institution and its alumni,” he said.

President Roosevelt has repeatedly stressed that ending the “cycle of poverty” at Antioch College is critical to its revival. The school will have an $8 million a year budget when faculty and students arrive next fall, Roosevelt said recently, and aims to raise about $3 million in its annual fund drive that ends June 30. The funding gap of about $5 million will be filled by major gifts, Roosevelt has said, emphasizing that the college is especially dependent on donors in its first years in which students are not paying tuition.

Since its revival two years ago, Antioch has also raised $22.4 million in a multi-year capital campaign, according to Director of Communications Gariot Louima.

The fund-raising job he’s taking on is a huge one, Sturman knows, but he’s excited. He’s spent much of the past several years in airplanes flying to meet donors, and expects to do the same at Antioch to meet with alums to “share the news that Antioch is alive,” he said.

Since Sturman’s appointment, some concerns have been raised on an Antioch College alumni discussion board regarding his political views, since on his Facebook page Sturman expressed enthusiasm for a former Republican candidate for the Indiana state legislature.

That Facebook statement did not indicate a political endorsement, according to Sturman this week, who said he was not even aware of the candidate’s political views. Rather, he said, the man is a friend.

Still, Sturman said, political views are a “personal thing,” although he said he has “embraced progressive values — that’s important to me.”

But Sturman does not see his new job as promoting a certain political perspective.

Regarding Antioch College graduates, “We have graduates on both sides of the aisle and I have to serve all graduates,” he said. “My goal is to work toward the school’s goals, not to promote one value or another value.”

Sturman was not looking for a new job, he said, when he was contacted by the search firm Isaacson Miller for the Antioch position. But he was intrigued at the prospect, and especially interested after he came to the college and interviewed with its new president.

“Mark Roosevelt has a bright intellect and I thought it would be a fascinating place to work,” he said.

Sturman plans to move to the village soon. His wife, Paula, will join him when she can, but first the couple has to sell the farm they own outside of Plymouth. Currently, Paula Sturman manages the Culver Academy fitness center. The couple has two children, Eric, who works as a graphic designer in Columbus, and Meg, who consults for an Indianapolis business that specializes in green solutions to business problems.

In Yellow Springs, Sturman hopes to pursue his passion for gardening, and he and his wife both enjoy fixing up old houses. A potter as a young man, he said he’s excited to be joining a community of artists. He’s also looking forward to taking advantage of the bike trail.

“Yellow Springs looks to be a delightful place,” he said.

Before working as a fund raiser for the Culver Academies, Sturman for 23 years operated Sturman and Company, a manu­facturer’s representative sales agency. He and his family lived then in Delaware, Ohio, where he managed the Ohio sales territory.

Sturman earned a bachelors of science in management degree from Purdue University and attended the fund raising school at the Indiana University Center for Philanthropy.