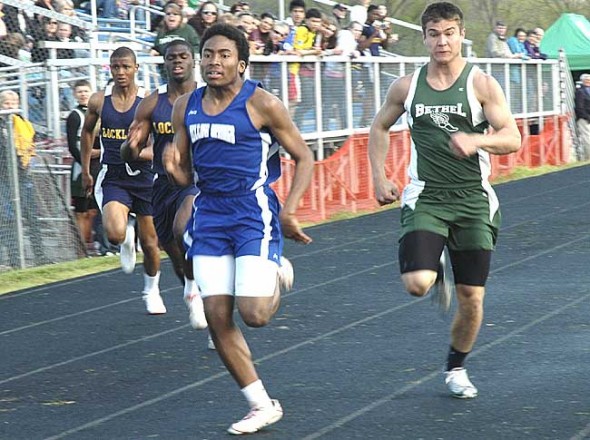 Yellow Springs High School senior sprinter Mario Cosey was the runner-up in the 100-meter dash in a tight race at regionals on Friday, solidifying his place at this week’s state tournament in Columbus. There Cosey will get a final chance to accomplish a long-held goal — to become a state champion.

Cosey finished in a fast 11.17 seconds with a late push to the front of the pack at the Southwest Ohio Division III Regional Championships, held in Troy. Cosey is hoping to improve on his fifth-place finish last year at states, where he ran the event in 11.27 seconds.

“I’m pumped,” said Cosey of the opportunity to compete once again at the highest level in high school athletics. Especially impressive is that Cosey didn’t start practicing with the track team until last month due to a groin and hip injury sustained during the fall soccer season.

But at his first meet back from injury — last month’s Bulldog Invitational — Cosey ran the 100-meter dash in an impressive 11.29 seconds and, for the next few weeks, never slowed down. Cosey said his personal record, hand-timed last year at the Wayne Invitational, stands at 10.8 seconds, a time he will at least have to match in order to win at states.

What will make the difference for Cosey is a quick start, because he can maintain his sprint while his competitors slow down, Dierauer said.

“The trick is for him to get into a good position after 30 meters — then he’ll run them into the ground,” Dierauer said.

Cosey is running for gold and to impress the track coach at Purdue University, where Cosey will enroll in the fall and try to walk onto the team.

“Go big or go home,” Cosey said of his decision to choose a Division I school.

Cosey wasn’t the only Bulldog angling for a chance to compete at the state tournament.

Lois Miller, who broke the school record in the 1600-meter earlier in the season, went on to shatter the school record in the 3200-meter at regionals. Miller bested her own time from last year’s regionals, finishing in 11:52.98. She came in eighth place, short of qualifying for states. Earlier this year the sophomore qualified for the state tournament in cross country’s 3.1 mile race.

“Lois’s time would have easily qualified for state in any year but 2011,” said track coach Vince Peters. “Lois is one of the best and most dedicated — she works hard.”

Miller was honored as the recipient of the Metro Buckeye Conference’s sportsmanship award for her season.

Sophomore discus thrower Angela Allen, who made regionals with a clutch final heave of 91 feet 5 inches at the district meet, was up against stiff competition and her own nerves. Her best effort was a toss of 92 feet and 9 inches, good for a 12th place finish but shy of the fourth place needed to qualify for states.

Allen said she wasn’t pleased with her performance. In the practice rounds, she was throwing the discus to more than 100 feet, a distance which would have sent her to Columbus. But overall, Allen said she has improved her technique and quickness this season. She set her personal record of 94 feet at last month’s Bulldog Invitational.

Angela Allen received the Bulldog award at the team’s track banquet as the team’s MVP. She was also recognized as Yellow Springs’ sole honoree of the Metro Buckeye Conference’s All League award.

Junior Antone Truss cleared 6 feet, 1 inch in the high jump at regionals and was among the final athletes vying for a spot at the state tournament. But he didn’t move on when he couldn’t clear 6 feet, 2 inches and finished in the seventh spot.

“I did okay — I was hoping for state,” Truss said. Though he also competes in the long jump, the high jump has been Truss’ main event since seventh grade. His personal record came earlier in the season, at the KTC meet, when he cleared a daunting 6 feet, 3 inches, a jump which would’ve landed him in the top three at regionals.

“I improved a lot and my form got better,” Truss said of the season. Though Truss also plays basketball and soccer, he said he prefers track and field because the “players are more friendly — not as in your face as other sports.”

Track and field coach John Gudgel was proud of all the Bulldog athletes for making it to such a high level and performing solidly.

“Everyone gave a maximum effort,” Gudgel said. “It’s so hard at this level — there’s so much competition and emotion.”

Added Coach Dierauer: “On the one hand we were surprised they made it this far, but on the other hand we were not surprised because of the hard work they put in all year long.”

Preliminaries will be Friday, June 3, and finals on Saturday, June 4, at Jesse Owens Stadium at Ohio State University in Columbus.