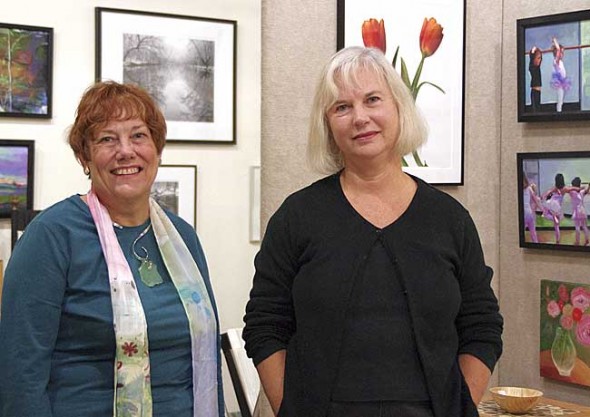 Gayle Sultzbach (left) and Christine Klinger opened Springs Gallery in Kings Yard this spring, featuring art by local and regional artists, as well as some of their own work. (Photo by Sehvilla Mann)

Art aficionados can be expected to embrace a new gallery in the downtown. But Gayle Sultzbach and Christine Klinger, the owners of the Springs Gallery, say they also welcome those who know they like art but feel lost when it comes to buying it.

Sultzbach and Klinger, both visual artists themselves, recently opened their business in the Kings Yard Shops at 220 Xenia Avenue (previously the location of the antiques shop Footprints of the Past, which has moved two doors down). Their gallery features pieces by a variety of local and regional artists, as well as some of their own work. The two said in a recent interview that by offering a variety of art at different price levels, they hope they’ll have something for everyone. They also said they are glad to advise customers who would like to learn more about the pieces that interest them.

Sultzbach is a watercolorist who also hand-dyes and paints silk scarves. Klinger has worked in multiple media, including photography, clay and sculpture.

“My current obsession is painting — mostly plein-air, landscapes,” she said. Both have previous retail experience, and Klinger was the coordinator of the Rosewood Gallery in Kettering for “nine-plus years.”

“I’d been thinking about having a gallery off and on for a long time,” she said, adding, “I had to wait till the time was right.”

She knew where she would open it.

When a space in Kings Yard became available, Klinger said, “I knew I had to find a partner.” She and Sultzbach knew each other through Glen Helen, where they had both exhibited work. Running a gallery together fit their “mutual art interests.” After more than a month of preparing the space, the Springs Gallery officially opened on April 16.

Their first month in business has seemed to reinforce the feeling that they chose the right time and right place. Kings Yard is a “great location,” said Sultzbach. Klinger noted that there’s plenty of foot traffic past the Springs Gallery. “We’re encouraged that people are starting to find us after even a short amount of time.”

The space itself, compact but filled with light, has “worked out great,” said Klinger. She praised the community among shop owners in the yard and added in an e-mail that the management of new owner Bob Baldwin has been “excellent” and “very helpful.”

Rather than seeing the village’s other galleries as competition for their business, Klinger said, “I think that we can all benefit from each other, especially if we have different items…it helps the village become known as a destination and as an art town.”

The Springs Gallery’s current selection includes drawings and paintings large and small, glass and ceramic sculptures, photo prints, pottery and jewelry. “Knowing so many visual artists, I was able to handpick artists whose work I’ve admired over many years,” said Klinger.

The store includes some very high profile artists along with cottage artists, according to Sultzbach. “Cottage artists” are those who are “still under the radar” and “never before represented, ” Klinger said.

They aim to offer their customers something different. The gallery features some “unusual jewelry,” said Klinger, and works by a Dayton artist who paints on rusted steel. Sultzbach was especially pleased that they could offer several pieces of horsehair pottery by another artist in Dayton. The pieces are distinguished by the unique line patterns on their surface, created by adding horsehair during a stage of the finishing. Sultzbach said she’d previously only ever seen such pieces for sale in the western states.

Both said they were surprised and impressed by the distances their customers were visiting from; many travel from Cincinnati and Columbus, and some were from states as far away as California and Arizona.

They are hopeful that the business will sustain itself. “I think the economy will improve,” said Klinger.

As for adding more art, “We’re in good shape right now, but we’re always on the lookout,” said Klinger. “If people have been doing their art for a while and are comfortable with getting it out there, they can give us their contact info and a way to see their artwork online.”

“I’m really hopeful that we can continue to find new artists,” said Sultzbach.

The Springs Gallery will host its grand opening on the day of the Art Stroll, June 17. It’s currently open Wednesday–Sunday, noon–7 p.m., and noon–9 p.m. during Third Friday Flings. The shop will be open during Street Fair on Saturday, June 11. Those who would like to reach Klinger and Sultzbach may contact them at springsgallery@earthlink.net, and more information about the shop is available at their blog, http://www.springsgallery.blogspot.com .