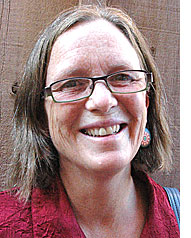 Louise Smith was recently named dean of community life by administrators of the revived Antioch College. (Photo by Diane Chiddister)

On June 22 Antioch College President Mark Roosevelt announced that former college theater professor Louise Smith has been hired as the college’s new dean of community life. In her position Smith will report to the president and serve on the college’s senior leadership team.

“This is a critical, central job for the college as we move forward,” Roosevelt said in a press release. “We found the right person with the right set of skills to do this work. I’m so pleased to be welcoming Louise back to Antioch College.”

The new position “is a crucial one,” Smith wrote in an e-mail this week. “Along with really walking the talk of fostering a healthy community life on campus, what it also needs to do is strengthen the bridge between campus and Yellow Springs in ways that are deep and enduring. The name of the poisition reflects the desire on the part of the college to be inclusive, to think about community in its broadest sense.”

Regarding her appointment, “I have been overwhelmed by the expression of support I have received in both the Yellow Springs and the Antioch communities. I am honored and a little bit terrified at the expectations and needs the position carries with it,” Smith wrote in the e-mail. “ I feel extremely grateful to have the opportunity to contribute to the shaping of the new college and its relationship to the village. I am also aware of all of the hard work that has been done by my colleagues in the college and at Nonstop. I want to honor everyone’s efforts: faculty, administrators, staff, alumni, villagers — by moving forward in the best ways possible.”

The position is equivalent to a dean of student affairs position, although “the shift to community life in the title signifies the importance of community building” at Antioch, according to Hassan Rahmanian, the college’s vice president for academic affairs. “This position is broader and deeper than the traditional one.”

“I’m very excited” that Smith was chosen for the job, Rahmanian said, citing her history with Antioch College before it was closed in 2008. A 1977 graduate of the college, she later came back as theater professor, then chair of the theater department, then associate dean of faculty.

“In all of those positions, she proved a successful leader,” Rahmanian said, citing Smith’s tendency to be “very fair and very firm” and to express herself directly regardless of the popularity of her position.

“She speaks the truth and the community appreciates that,” he said.

About 60 candidates applied for the job, Rahmanian said, describing the process as an effective one with a “strong pool of candidates.”

Ultimately, he said, Smith rose to the top due to her deep knowledge of the college and her personal skills and strengths, including her “insights about community, her leadership skills and skills in listening, her ability to form community and her creativity.”

An actor and performance artist, Smith after graduating from Antioch in 1977 worked in New York, touring nationally with Julie Taymor, Ping Chong and Company, Meredith Monk and Illusion Theater, among others. She won an Obie Award in 2003 for her performance in “A Painted Snake in a Painted Chair.”

Smith returned to Antioch as theater professor in 1994, a position she held until the college was closed in 2008. She holds a masters in playwriting from Antioch University and a masters in community counseling, with licensure from the University of Dayton. After the college closed, Smith worked in mental health in the Dayton area.

“It means a great deal to me to do this job well,” Smith wrote this week. “I bring an interest in making things lively and fun.”

For the past five years Black has taught in the performance and sculpture departments at Northwestern University and the School of the Art Institute of Chicago. Previously, she taught beginning, intermediate and figure drawing at South Suburban College, led an arts apprenticeship program at the nonprofit Street-Level Youth in Chicago, and taught 3-D visual language and experimental design at the University of Chicago and Illinois Institute of Technology.

Black’s solo and collaborative exhibits have been featured at a variety of spaces, including the Museum of Contemporary Art in Chicago, the Experimental Station, Gallery 400, the Hyde Park Art Center, and the Park Avenue Armory.

Gano was most recently a visiting assistant professor of American Studies and Latino Studies at Indiana University in Bloomington. Her teaching and research has focused on 19th- and 20th-century American literature and culture; Chicana/o literature and film; and GLBTQ and gender studies, among other topics.

Before Indiana University, Gano was a lecturer in the Department of English at UCLA and a postdoctoral teaching fellow at Stanford University.

She earned a bachelors in English, with honors, at Stanford, and a masters and PhD at UCLA. She is currently expanding and revising her dissertation for publication as Un-American Places: Geography, Race and Nationalism in Modern Literature.

The college has previously filled the tenure-track positions in chemistry, philosophy and cultural anthropology, and has one more position, in Spanish, to fill.