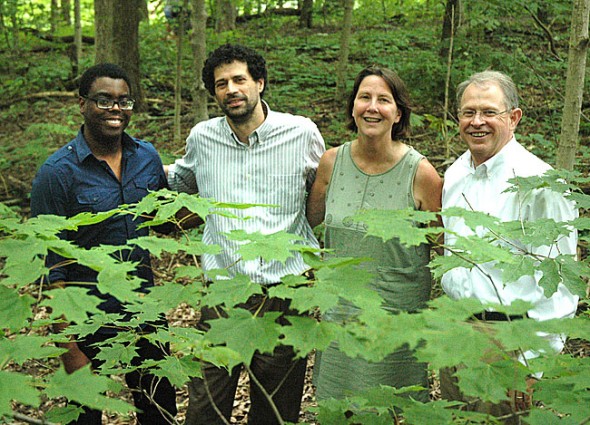 If a new collaboration is successful the Glen Helen Nature Preserve may be permanently protected from development in a few years. At a meeting last week, Gariot Louima of Antioch College, Nick Boutis of the Glen Helen Ecology Institute, Krista Magaw of the Tecumseh Land Trust and Bill Carroll of the Trust for Public Land, gathered in the Glen. (Photo by Megan Bachman)

The Glen Helen Nature Preserve has been saved from development several times in its 82-year history. In the 1920s, plans to sell the land to an amusement park developer prompted Arthur and Lucy Morgan to find donors to buy the first properties that became the Glen. Later, in the 1960s, the Glen Helen Association fought off efforts to re-route U.S. 68 and the Village sewer line through the preserve.

If efforts now underway are successful, Glen Helen will be permanently protected from development in a few years. That protection effort took a major step forward this month with a renewed commitment from the 1,000-acre nature preserve’s owner, Antioch College, and a new partnership with the Trust for Public Land.

“We’re closer than we’ve ever gotten to permanent protection,” said Nick Boutis, executive director of the Glen Helen Ecology Institute, in an interview last week. “We’re working to establish a modern conservation easement that hardwires in protection, regardless of changes in politics and economics.”

Under the proposed arrangement, the title for the Glen would be held by a newly-created nonprofit — the “Glen Helen Conservancy.” The Trust for Public Land, a national conservation group, would secure private and public funds to purchase the land and the conservation easement. The Tecumseh Land Trust, best known as a farmland preservation organization, would hold and monitor the easement that limits development. The Ohio Environmental Protection Agency would provide funding for a strict environmental covenant protecting the most ecologically-sensitive areas of the Glen. And Antioch College would place the funds raised in an endowment to allow for the ongoing operations of the preserve.

After the deal is complete, the Glen would be protected in perpetuity no matter what happens to Antioch College, Boutis said. And the college, which would receive a one-time cash payment for the property, would continue to utilize the Glen as a vital resource for its students and faculty through the Glen Helen Conservancy, whose founding members will include representatives from the Antioch College board.

“The interest of the college is protecting the Glen for future Antiochians,” said Gariot Louima, Antioch’s director of communications. “Antioch College sees [the Glen] as an educational resource, and that won’t change.”

Preserving the Glen has been a goal of the village and college for generations, and some protections are already in place. Those who purchased the land intended for it to be preserved in perpetuity. In Hugh Taylor Birch’s original deed of 850 acres to Antioch, Birch gave the land “to the end that the students and faculty of Antioch College and its successors may forever have available, adequate facilities for the study of varied forms of life, for the exploration of past forms and conditions of life…” In the 1960s, Ken Hunt organized country commons on about 70 acres of Glen in which neighbors took out easements on each other’s property.

More recently, 250 acres around Birch Creek and Yellow Springs Creek were protected as a National Natural Landmark, 2.5 miles of the Little Miami River were designated a National Scenic River, and in 2009 the Ohio EPA approved $1.2 million to the Glen to protect its most ecologically-significant areas. That funding will come through once an environmental covenant is signed by the new Glen Helen Conservancy. But most of the Glen has no such protections and even the protected areas remain vulnerable, according to Boutis.

“None of the [protections] have teeth enough to ward off a vigorous legal challenge and none cover the whole preserve,” Boutis said. The new easement and covenant will assure that the Glen cannot be subdivided, developed, or used for commercial purposes. In more pristine areas, the environmental covenant would require EPA consent to even relocate a trail or build a bridge.

Involving the Trust for Public Land is seen as an important step in the process since the group, founded in 1972, brings substantial experience in preserving natural land that the public can access.

Efforts to prepare an appraisal of the land’s development potential and survey its ecological significance have already begun. While the monetary value has yet to be determined, the land’s ecological value is clear, according to Boutis.

“There are few areas in this part of the country as large as this parcel with as many significant areas that have never been logged and farmed,” Boutis said. Most of the Glen has never had development pressure since it went from a Native-American hunting ground, to a resort, to being part of Antioch College, Boutis added.

Within the Glen are several places of historical and ecological importance, including mounds, earthen enclosures, 450-year old trees, scenic rivers, slope wetlands and uplands and other diverse habitats, Boutis said. The Glen is host to rich wildlife, including at least 90 species of birds that were counted in the Glen this spring.

The Glen additionally filters and purifies the area’s water supply, since the Village wellhead recharge zone is largely within the Glen, said Krista Magaw, executive director of the Tecumseh Land Trust, which holds easements, or is in the process of completing easements, on over 19,000 acres of agricultural and natural land in Greene and Clark counties.

“This is our home and the Glen has always been a part of our sense of place to our board and members,” Magaw said. “This is so we know [the Glen] will remain several generations down the road.”