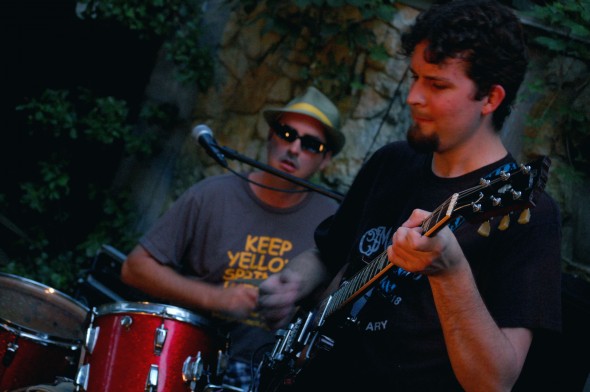 From left, Jessica Kinzer, Matt Housh and Ryan Henry are The Show, an indie punk band based in Yellow Springs. (Photo by Megan Bachman)

The Show performed at the Oten Gallery as part of last weekend’s Yellow Springs experience. Self-described as a “funky spy punk” band with pop songs, The Show now releases its self-titled, self-produced album on July 30, with concerts at the Oten Gallery at 8 p.m. and Peach’s Grille at 11:30 p.m. In conjunction with its show, a display of Henry’s concert poster art continues at the Oten Gallery until Aug. 13. The event at the Oten Gallery costs $5, but free tickets are available at the Arts Council and the Chamber of Commerce through July 29.

Even though two of its members live in Springfield, The Show considers itself a Yellow Springs band. The band was born at a Peach’s open mic night, features Mills Lawn School Principal Housh, plays most of its gigs here and generally feels the love from the town. The band consists of keyboardist and vocalist Jessica Kinzer, guitarist Ryan Henry and drummer and singer Matt Housh.

See the July 21 issue of the YS News for the full story.

One Response to “VIDEO: Local band The Show performs at YSAC”