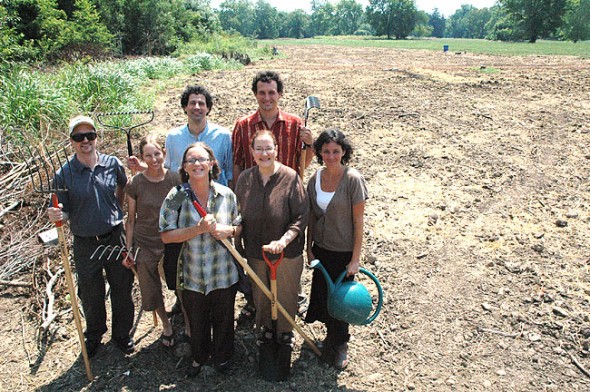 Antioch College recently announced that it has begun the Antioch College Farm, its first major sustainability project, to be located on the former "golf course." Shown above is the committee of faculty and staff who are meeting to explore ways to integrate the farm into campus life. From left, first row, are: chemistry professor David Kammler; local farmer Kat Christen, who will design the farm's first phase; Dean of Community Life Louise Smith; and Glen Helen Project Managers Ann Simonson and Brooke Bryan. In back are Glen Helen Director Nick Boutis, who will coordinate campus sustainability efforts, and philosophy professor Lewis Trelawny-Cassity. (Photo by Diane Chiddister)

Antioch College recently announced that it has launched its first major sustainability project, the Antioch College Farm, to be located on the former college “golf course” and former campus garden. Glen Helen Director Nick Boutis will coordinate the college’s sustainability efforts, including the farm, and organic farmer Kat Christen has been hired to design the first phase of the project.

In June, Antioch College President Mark Roosevelt announced that sustainability will be a major focus of the new college.

A committee of faculty and staff are meeting to explore ways to integrate the farm into the life of the campus. Organizers envision the farm as providing not only opportunities for students to grow fruits and vegetables and learn sustainability practices, but also to provide learning that could be incorporated into a range of classes, from chemistry to philosophy.

And the college’s unique position of regenerating itself after being closed puts it at an advantage regarding the new project, according to Boutis in a recent interview.

“Most colleges can’t integrate the farm into their campus from the get-go but we can,” he said. “If we do this wisely, we can figure out how the farm interacts with the facilities, the curriculum and the community. I think it’s incredibly exciting and one of the things that Antioch intends to do moving forward.”

See the Aug, 4 Yellow Springs News for a more detailed article on the Antioch College farm.