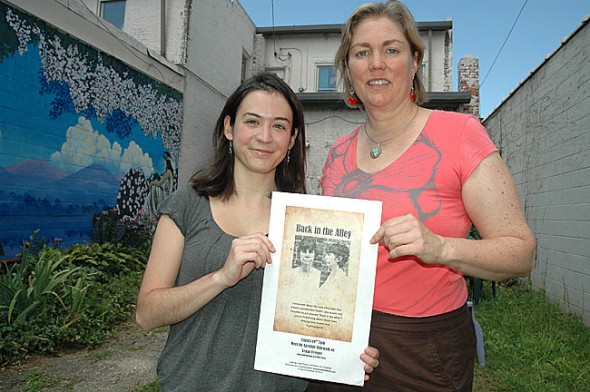 Sarah Jones and Lori Askeland are organizing a pro-choice rally to raise awareness about legislative attacks on women’s reproductive rights. The event, Back in the Alley, takes place at 7 p.m., Friday, Aug. 19, in Kieth’s Alley behind Ohio Silver, 245 Xenia Avenue. (Photo by Megan Bachman)

Legislative attacks on women’s reproductive rights are pushing them “back in the alley,” according to organizers of a local event to protest state and federal efforts to limit abortion.

The event, Back in the Alley, takes place at 7 p.m. Friday, Aug. 19, in Kieth’s Alley behind Ohio Silver, 245 Xenia Avenue and aims to organize opposition, raise awareness and provide space to share pro-choice stories.

“It’s not just abortion. The spectrum of reproductive rights and the ability of women to protect their health is threatened,” said Sarah Jones, a local resident co-organizing the event along with Village Council representative Lori Askeland.

“The alley is where we’re going to end up if these bills pass,” said Askeland, referring in part to the so-called Heartbeat Bill, House Bill 125, which earlier this year passed the Ohio House of Representatives. Federal legislative challenges to Roe versus Wade are also making their way through Congress, Askeland added.

Organizers will brief the crowd on the potential effects of various legislative proposals in Congress and how local groups are working to prevent them from becoming law. In addition, attendees will be invited to write about their experience with reproductive choice on bed sheets, which will be hung around the alley and later sent to the president of the Ohio Senate.

According to Jones and Askeland, many people are apathetic about issues affecting women’s “most basic bodily and medical decisions” and the event offers an opportunity to show support.

Jones is a recent Cedarville graduate and former pro-lifer who said she changed her mind when she became a feminist and found religious and medical arguments against abortion didn’t hold. She became increasingly concerned about losing the ability to control her body and health choices after being sexually assaulted, she said.

Jones and Askeland met while lobbying for pro-choice at the Ohio Statehouse and urging State Rep. Bob Hackett, R-84, and State Senator Chris Widener, R-10, whose districts include the village, to vote against the House Bill.