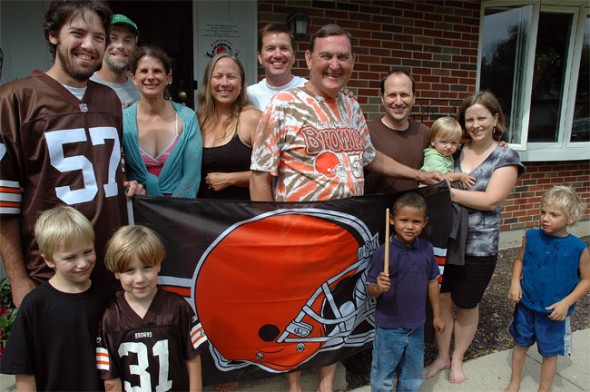 For fans of Cleveland Browns football “there’s always next season.” The mantra is familiar to any supporter of the Browns, a team that has had more than its share of disappointments.

Now a group of ex-Clevelanders and other Brown fans are coming together to share in the Sunday afternoon glories and defeats.

“To be a Browns fan, you are filled with perpetual hope,” said Chris Hutson, one of the organizers of the Yellow Springs Browns Backers at a gathering of the Brownie faithful last Sunday.

So far the local chapter of the club has 25 members who plan to potluck, celebrate and commiserate throughout the season. Membership costs $25 for an individual or $40 for a family and goes towards the purchase of a cable channel that carries all of the games. The group will watch all games at the home of Hutson’s co-organizer Jason McClean, 693 Omar Circle. The first gathering will be Thursday Sept. 1 at 8 p.m. for the Browns final pre-season game against the Bears. The regular season kicks off at 1 p.m. on Sunday, Sept. 11 against the Bengals at home.

With the Browns 1–0 in pre-season play, the crowd was optimistic on Sunday.

“Well, I’m cautiously optimistic,” Hutson admitted. The group discussed the team’s prospects: How will Peyton Hillis respond to his 1,100-yard, 14-touchdown rushing season last year? Will he succumb to the Madden curse? Can second-year quarterback Colt McCoy step up? What about star Josh Cribbs?

McClean and Hutson organized the club so Browns fans could have the company of one another.

“They started coming out of the woodwork,” Hutson said. “I think Browns fans are a little neglected.”

Games are BYOB and anyone can join. Well, almost anyone.

To register for the club, fill out an application here