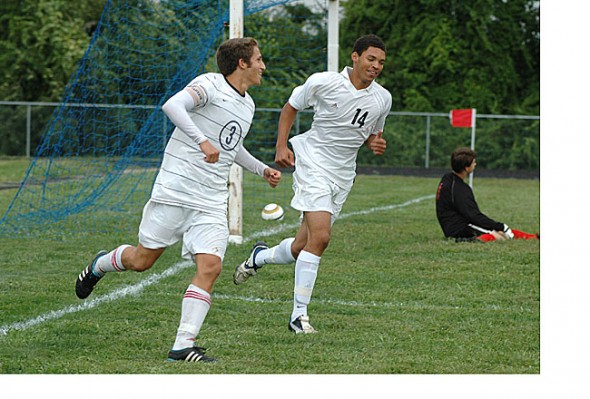 Seniors Jacob Trumbull and Antone Truss celebrate Trumbull's third goal in the first half of the Belmont game. (Photo by Megan Bachman)

Last week the YSHS boys soccer team held their home opener and gutted out their first win of the season, topping Belmont by a final score of 5–2.

Jacob Trumbull opened the Bulldogs’ scoring account just seven minutes into the game, assisted by Wade Huston. Ten minutes before the break Belmont knotted the score at one each. Four minutes later Trumbull slammed a free kick into the back of the net from 15 yards out, assisted by Jared Scarfpin, who had pretended to tie his shoe. One minute later a quick restart by Scarfpin near midfield sent Trumbull to goal on a fast break and a Yellow Springs 3–1 lead at the half.

Fifteen minutes into the second half Nathan Miller added to the Bulldog lead, slicing through the Bisons’ defense before placing his shot past the Belmont goalkeeper at close range. Ian Chick picked up the assist. Less than 2 minutes later it was Huston and Miller combining to send Chick to goal for the final Yellow Springs score of the night. A penalty kick awarded to Belmont with 20 minutes remaining in the game closed out the scoring for the night.