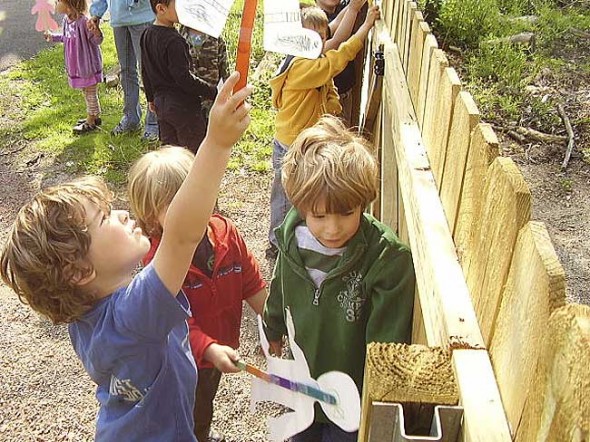 Many Yellow Springs nonprofits have a friend in the Morgan Family Foundation, which has contributed several million dollars to local groups since 2003. Seeded by longtime Yellow Springs residents Lee and Vicki Morgan with proceeds from an Antioch Company stock sale, the foundation has grown to nearly $50 million in assets. Eight years and numerous grateful grantees later, the foundation board remains committed to supporting charitable organizations in Ohio and Minnesota, with an eye to funding the unique.

“We make sure we have an openness on the board to not give to just the standard causes — we don’t want to limit it,” said foundation board president and former Antioch Company CEO Lee Morgan in a recent interview.

The foundation has largely funded groups that aid youth, women and immigrants and promote education, healthy living and the arts, though it also supported chemical sensitivity research, purchased baby cribs for an organization that donates them to low-income families and funded a medical training robot.

Most grants have flowed to the Yellow Springs and St. Cloud areas where the Antioch Company, now known as Creative Memories, had offices, because “the money that came was generated by those two communities,” Morgan said. The Antioch Company, originally Antioch Publishing, was founded in 1926 by Lee Morgan’s father, Ernest Morgan. While Lee Morgan and his wife now live near St. Cloud, the foundation is based in Yellow Springs.

Ohio organizations have received, or been promised, about $7.8 of the $14.6 million in approved grants, more than half of which has been pledged to an independent Antioch College in its efforts to re-open. The foundation has recently helped the Yellow Springs Community Children’s Center make capital improvements, paid for Rwandan students and teachers to visit Yellow Springs High School, repaired a leaky roof at the First Presbyterian Church, built climbing walls at 4-H Camp Clifton, revitalized the Yellow Springs Arts Council, brought yoga instruction into the local schools and more.

“Giving away money is not easy,” said Vicki Morgan, a former Creative Memories senior executive director and the foundation board’s vice president. Morgan helps review more than 100 competitive applications for funding per year, about 30 to 50 percent of which typically receive some level of funding between $10,000 to $100,000. The foundation grants about $2 million a year.

Organizations are thoroughly vetted to evaluate their ability to accomplish their stated grant goals and to determine if the need is there, according to Executive Director Lori Kuhn, who is based in the foundation’s office on Glen Street.

“Sometimes an idea sounds great, but is it really needed, is the approach sound, is the organization capable of carrying out the idea as described, and is the budget realistic?” Kuhn said of the factors evaluated in grant applications.

The foundation began from an unexpected windfall the Morgans received when they sold their stock to the Antioch Company’s Employee Stock Ownership Plan, or ESOP, during a 2003 restructuring. Both Lee and Vicki worked at the Antioch Company and retired in 2008.

“We ended up with money we hadn’t anticipated, so it made sense to put it into a foundation,” Lee Morgan said

The Morgans established the private foundation in 2008 with a governing board of family members and $44.6 million in assets, the maximum amount for which they could receive tax breaks. But their motivations went beyond tax breaks to a desire to supplement their personal giving and encourage their family members to do the same.

“One of my goals was to build philanthropic habits in the family,” said Vicki Morgan. The Morgans’ children, Matt Morgan and Asha Morgan Moran, and their son-in-law Marty Moran make up the rest of the board, which meets twice a year to approve grant requests. The foundation also offers to any family member, age 12 or older, who attends a bi-annual family reunion the opportunity to give $500 to an organization of their choice.

“With $2 million annual giving [$500] is chump change,” Vicki Morgan said. “But it’s fun and it fills my urge to promote philanthropic giving in the family.”

The foundation has pledged $4.3 million in support of an independent Antioch College since 2007 (including about $1 million through a donor-advised fund at the Dayton Foundation) which Lee Morgan said he leveraged to raise millions more as a college fundraiser.

“It’s strengthened my hand in raising $20 million,” he said.

Morgan said the foundation board has always been sympathetic to the college’s needs, since three of the five board members are Antioch alumni — Lee and Vicki, who graduated in 1966, and their son Matt — while Asha took classes at Antioch while in high school.

“We have to get it to a place of stability,” Morgan said of the college. The foundation’s support for Antioch will continue, he said, “until they are able to get steady funding — provided we like what we see.”

Another major effort began when the foundation purchased the $410,000 Barr property at Limestone Street and Xenia Avenue in 2005 with hopes that it might become a community performing arts center. The idea did not begin with the foundation, nor did its board want to impose its vision on the community.

“If we were really focused on the end results, the Morgan Family Foundation could put up a building itself — but that was not the point,” Kuhn said of the multi-year effort to explore a local performing arts center. “It has to be something the community believes in and buys into.”

The foundation went on to provide seed funding and continued support for a group, the Center for the Performing Arts Steering Committee, which hired consultants and held community meetings to identify and build a space. The committee has received $62,500 since 2007.

The Morgan Family Foundation has been a strong supporter of youth and the arts locally through grants to the Yellow Springs Kids Playhouse, Youth Orchestra, Community Children’s Center, the Antioch School and Yellow Springs Arts Council. The foundation has supported affordable housing with a $60,000 grant to Home, Inc., environmental activities with grants to the Tecumseh Land Trust and Community Solutions and has helped to renovate the Senior Center, the Village train station and the Antioch tennis courts. Though it has focused more on Yellow Springs than surrounding areas in recent years, the Morgan Family Foundation still grants to organizations in Xenia and Dayton, especially those that serve Yellow Springs. For example, it has given grants to Sensible Shelter, Inc. in Xenia to match participant contributions for local residents to buy a home, start a business, or continue their education; supported Cityfolk in Dayton to expand programming into Greene County, and made a grant to the Children’s Medical in Dayton for a child advocacy center for abuse victims in the county.

Because the foundation has been designed to exist in perpetuity, it has plans to continue to support local organizations, or organizations serving the Yellow Springs area, by giving away five percent of its asset value each year, the minimum required by federal law.

For Lee and Vicki Morgan, the reward is in hearing the stories of successful projects, not in being recognized for their philanthropy.

“We’re transparent but we’re not into promoting ourselves,” Vicki Morgan said. “Some of it is Quaker, some is Ernest [Morgan] looking down on us — we’re not interested in accolades.”

Letters-of-inquiry for the next funding cycle are due Jan. 8 and guidelines are available at the foundation website, http://www.morganfamilyfdn.org. The foundation provides support for program, capital and operating grants and helps with capacity-building. For more information about grants, contact program officer Emily Fine at 937-767-9208 or 937-776-6624.