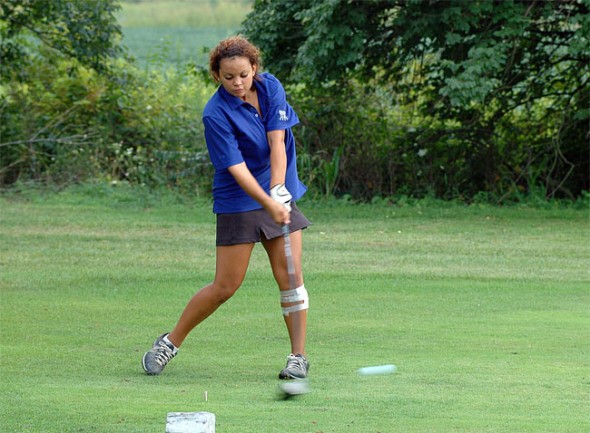 In perfect form, Rachele Orme crushed her drive past everyone on the third hole at Locust Hills last Thursday. (Photo by Megan Bachman)

Orme drives the distance for YSHS

The young but potent YSHS golf squad fell to Dayton Christian on Thursday at their home course, Locust Hills in Springfield.

Sophomore Rachele Orme, who last season averaged 48 from the boys tees, again led the Bulldogs with stellar play over the front nine. Orme finished with 42, which was just six over par and the match’s second best score.

The rest of the team are freshman, and showed potential as the YSHS golf team grows. Freshmen Theron Orme ended with 50, Liam Weigand was just behind with a 51 and Taylor Beck and Morgan Beard both scored 66.

As a team, the Bulldogs took 209 strokes to Dayton Christian’s 170.

See a gallery of photos from the match here

Rachele Orme’s consistency and strong driver once again propelled her to the top of the group. Orme crushed her drives on Holes 1 and 3. After missing the fairway right on Hole 1, she perfectly placed her second shot in the fairway to within striking distance of the Par 5 green. The 120-yard three stroke of the hole barely clipped the trees and dropped barely onto the front of the green. After putting to within five feet, the uphill par putt was right on the money.

Theron Orme, who initially thought his drive on Hole 1 went out-of-bounds, later found his ball safely in the fairway. His fairway wood took him to within just 15 yards of the green in an impressive stroke. Though his chip shot took him past the green, he used his putter to put his next stroke within inches, barely missing a birdie.

In the second group, Weigand played consistent golf, scoring a 7 and 5 over the first two holes.

The team is now 1–2 after notching a victory last week against Mechanicsburg and losing in their season opener to Bethel. They next take on Greeneview at Sebastian Hills Golf Course in Xenia on Sept. 17.