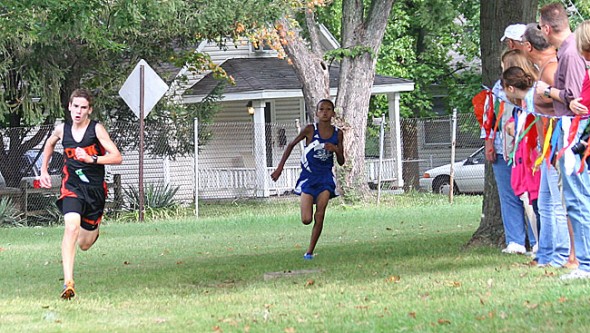 ROAD TRIPS TO EATON & BEYOND

Yellow Springs took a field trip to Fort Saint Clair Park in Eaton — a scant 10 miles from the Indiana border — for a highly competitive meet featuring 4 of the top 20 ranked schools in the state, and the top runners on both the mens and womens squads met the challenge.

In the mens race team captain Zach McHugh toed the line with squad mates Hunter Lawson and Eli Mulhall. Then the starting gun sounded – and while the acrid smell of gun smoke would mix with the tantalizing scents of team parents grilling out – it’s the accelerating sight and thundering sound of 300 plus feet across the wide meadow that overwhelms the senses. It even crushes the distasteful bouquet of the well-used porta-johns that are never, ever plentiful enough.

McHugh had his best start of the season as he matched pace with his main competitors from Metro Buckeye Conference rivals Troy and Xenia Christian schools through the first 800. Short minutes later his coaches smiled as an official read shouted out McHugh’s mile split of 5:21. Then came the tuff hills of the second mile.

Charging hard up the last of the hills McHugh cleared the two mile pole in 11:34, with the 6:13 split indicating the difficulty inherent to the Eaton course. A final kick brought the Cap’n home in 18:28 (approximately 6:14 for the third mile) – good for 35th place overall – out of 120 finishers.

“Zach ran real well and I was very impressed with Hunter Lawson’s huge improvement,” said cross country coach Vince Peters. “I like how all the guys are getting stronger and faster.” 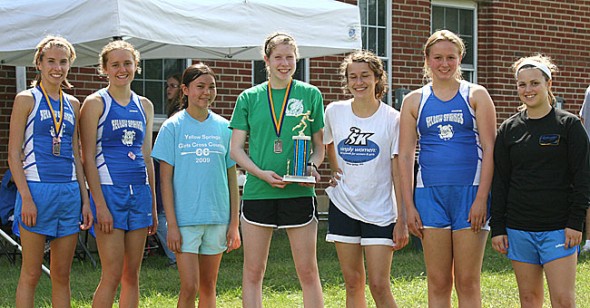 The women’s team finished 9th out of 18 schools participating at last Saturday’s Eaton Invitational behind the leadership of team captain Lois Miller. Miller, just a junior, broke the 21 minute barrier for the first time this year to place 12th overall. Like McHugh, her counterpart on the men’s squad, Miller had a very strong start, hitting the first mile clock in 6th place at 6:06. Her conditioning showed through a strong second mile as well. Miller’s stats were: 6:06; 13:09 (7:03); 20:59 (7:50). The last split – covering the final 1.1 miles works out to approximately 7:07 for the third mile of the race.

“Lois ran her best race of the season so far”, said Peters. “That fast first mile will help her prepare for the competition she’ll be facing at tournament time in four short weeks.”

The next three women on the team then secured the squad’s final standings. Placing 64th overall in 24:12 Rachel Meyer was heavily in the mix with a 6:54 first mile. Less than 10 seconds later was Christina Brewer at 7:03. Christina went on to finish 70th in 24:12. Rounding out the scoring and finishing her first race as a Bulldog was Ashley Merrit. Ashley placed 110th in 36:21.

The lady’s squad was missing several athletes, including Talia Boutis. Boutis was in Pennsylvania at a memorial service. Boutis, Mary Triplett, and Zoey McKinley are all expected back for Tuesday’s (tonight’s) meet at Ohio Caverns in West Liberty.

The McKinney Middle school team faced some pretty tough competition themselves at last Saturday’s meet in Eaton. Like the leaders of the high school teams – McHugh and Miller – CJ Johnson and Charlotte Walkey had great individual races.

In the middle school boys race CJ Johnson led the YS Bullpups to a 10th place team finish out of the 14 schools competing. Just a seventh grader – CJ handled the first mile of the 2 mile course in 5:36. And even though his second mile was a tad slower, he constantly weaved his way through the contenders ahead of him to place 4th overall out of the 132 runners competing. His final time was a very quick 11:44 (6:08 second mile).

Hayden Orme also ran a very strong race. He, and Levi Brown, ran together for much of the first mile in 6:20 with Brown just steps behind in 6:22. Then Orme, focused on the task at hand, aggressively charged up the hills in the second mile and finished strongly in 13:02 – which was good 37th overall and received a top 50 award.

Brown, another of the speedy seventh graders on the team, had the hills get the better of him on this occasion, but held on to place 61st in 13:56. Closings strongly during the second mile, but not quite catching Brown, were the trio of Gabe Tillana, Sawyer HaleWolf and Oluka Okia. They finished in 91st, 94th and 96th places, respectively. Okia led the pack thru the first mile in 6:51 with Tillana and Sawyer following a couple steps back (6:54). Their finial times were 14:45, 14:48 and 14:54.

Charlotte Walkey demonstrated again the strength of the harrier program at Yellow Springs HS when she sped thru the first mile of the middle school girls’ two mile race in 4th place with a very quick 6:08 split. A second mile filled with a series of hills slowed her overall pace but she still completed the course in an outstanding time of 13:20 – good for 6th place overall out of the 96 middle school girls competing.