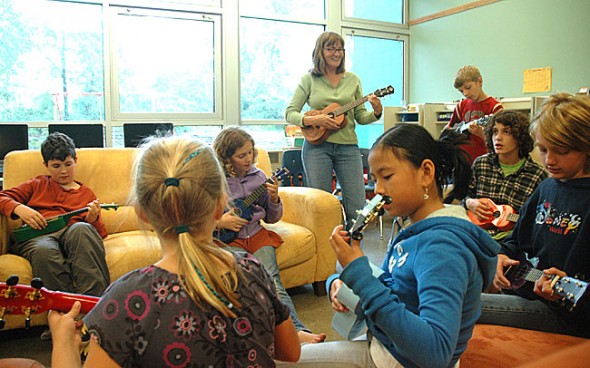 During a hike through the Glen last week at the beginning of the Antioch School year, science and art instructor Brian Brogan overheard his students discussing how they might make a movie about chess this school year. Inspired, another group of kids began writing an original chess song for the evolving film. In its 90th year, the local alternative school — one of the nation’s oldest — will once again craft lessons around the passions of its students, all the while continuing its longstanding traditions and tested instruction methods, teachers said last week.

“We facilitate and advise more than teach,” said Brogan, who now looks to create activities that align with the growing chess interest among the school’s students. Trends such as this often move through the school, he said. Last year knitting was popular among boys and girls.

“If you over-instruct, [the students] lose their motivation, so our curriculum is built around their interest,” added younger group teacher Linda Greene, whose students aren’t tied to a “three-ring binder.” Instead “their scope is the world,” she said.

At the Antioch School, on the edge of the Antioch College campus, enrollment is steady, a new development committee is building up the scholarship fund, energy-efficiency upgrades are paying off and a deepening focus on nature and health is connecting students to the world in new ways.

This school year 56 children from nursery school to grade six will attend, according to school manager M.J. Richlen, and though enrollment is slightly down from previous years, the healthy numbers in the nursery and kindergarten classes bode well for the school’s future. Still, the school is taking seriously the tighter financial situation of many of its families, last year starting a development committee to raise more private funds for financial aid. Tuition this year cost nearly $9,000 for a full-time student. The school is a nonprofit and receives no federal or state funding.

“The new development committee is working very hard to increase financial aid for our students and new families during these difficult times.” Richlen said.

Helping the school’s bottom line (its annual budget is about $570,000) are energy-efficiency upgrades implemented five years ago to the 60-year-old structure that have cut fuel bills in half. The major effort was installing new windows and the students have learned about green living through the process. The original design facilitates a connection with nature as well, teachers said.

“In the classrooms, the inside and outside blend,” older group teacher Chris Powell said. “The natural environment is incorporated in learning.”

While the school has many traditions in its seasonal celebrations and environmental lessons, it has been expanding its education even further into nature in recent years. Students had already been composting their food scraps, recycling used products, planting garlic and other vegetable crops in the school garden, preparing food for the annual Thanksiving celebration, raising animals and taking frequent hikes in Glen Helen. Last year local herbalists Marybeth Wolf and Nicole Rosaria-Manieri taught the students how to use wild native plants as medicine.

Students prepared wild weed salads from edibles identified in the playground and field, brewed root beer from an original recipe of ginger and sarsaparilla, made immune-building tea blends, herb pillows and herbal facial steams from local medicinals, learned how to treat bee stings and more.

“The students were utterly enthusiastic,” Rosaria-Manieri said. “They were so eager to learn about the plants and how to make medicine.”

Students then wrote a book on native plants, their medicinal properties and recipes for using them in cooking. That way students gained life skills and also writing skills in an approach that is common at the Antioch School.

“We know what [the students] need out of the experience,” explained Greene. “You can always build the skills in.”

By learning through practical experiences and play formulated from student interest, the children are more motivated to do their best, teachers said.

“We don’t put the student’s motivation there, but we also don’t take it out,” said kindergarten teacher Lindie Keaton. Keaton’s students largely structure their own time during the day in order to pursue their passions. By doing so they do more than if limited by activities developed by teachers. Keaton credits the unique learning environment at the Antioch School to how it’s organized, with a board made up of parents and teachers.

“The locus of control is in the classrooms — so we can be very responsive,” Keaton said.

Other teachers said the Antioch School is so successful in turning out mature, self-directed learners because students are unfettered by grades and changing state educational requirements, are assessed socially and emotionally in addition to academically, are grouped by student needs rather than ages, and often work among children of vastly different ages.

“The foundation of our education approach is trust in children to know what they need to learn,” Powell said, adding that this fosters independence in the children by respecting their choices and giving them the opportunity to learn from their own mistakes. Without grades, students work to do their best rather than try to just meet a standard, which can limit a student’s potential, Powell said.

Though many new activities have been planned at the start of the Antioch School’s year, teachers emphasized that the school’s method of cultuivating the joy of learning will remain largely unchanged.

“It’s not just a grand experiment,” Powell said. “The school has been run this way for 90 years.”