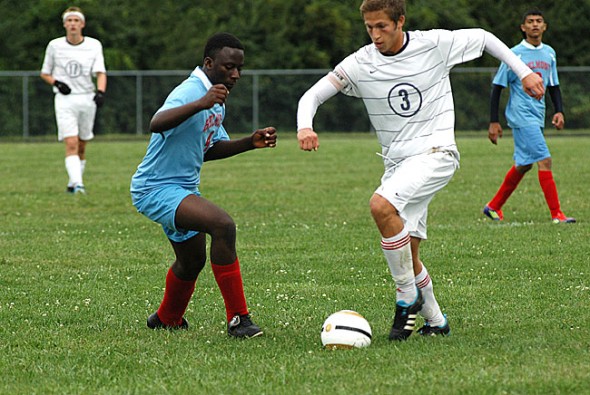 MBC goal leader Jacob Trumbull scored a hat trick in the first round of sectionals on Saturday. Here Trumbull dribbles past a Belmont player in last month's home victory. (Photo by Megan Bachman)

Post season is in full swing at Yellow Springs High School. On Saturday, the boys soccer team advanced to the second round of the sectional tournament while the girls season bowed out in their tournament’s first round and harrier Lois Miller advanced to regionals.

Under the lights at YSHS, the boys soccer team hammered Fairlawn in the first round of sectionals. Senior captain Jacob Trumbull added three goals on the night to increase his season tally to 63. Trumbull remains the top scorer in the Metro Buckeye Conference. Other goals were scored by Ian Chick (2), Wade Houston, Fielding Lewis, Cole Edwards, Heinrick Korsh and Kane Willis.

Junior harrier Lois Miller capped an exceptional week by qualifying for regionals on Saturday. After winning the Yellow Springs Invitational on Tuesday for the second year in a row, Miller placed seventh in the district tournament on Saturday. The 20:34.55 five-kilometer run was good to qualify for next weekend’s regional tournament. The girls cross country team, despite a stellar performance, finished just a few points shy of qualifying for regionals as a team.

The girls soccer team ended its season in the first round of its sectional tournament. The Bulldogs traveled to first seed Fenwick, a team which won the state tournament three years ago. The Bulldogs fell 8-2 after finishing the first half 5-1. YSHS footballers Paloma Wiggins and Kara Edwards netted goals on the game.