Create the power to grow 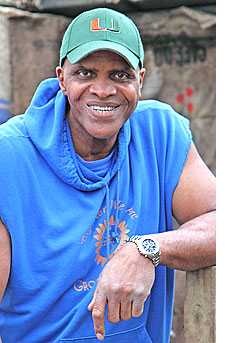 Urban farmer Will Allen will speak at next weekend’s Food Power Summit in Fairborn on how to get real food back into communities. (Submitted photo)

Local food has many meanings, but to Bob Jurick, having access to food locally is a social justice issue. People should be able to walk or drive a couple of blocks and buy fresh, healthy food at a reasonable cost, he said during an interview this week. That’s why when the Fulmers in downtown Fairborn closed in 2009, he and others from BW Greenway Land Trust began making noise about how to get real food back into the city through a community-supported grocery store.

“Fairborn is a food desert, where people are buying food at places like Dollar General and CVS, and they’re not eating well,” Jurick said. “The social justice issue is as important as anything else.”

Jurick isn’t the only one moving on local food in the area. Next weekend’s Food Power Summit, sponsored by Tecumseh Land Trust, will bring together dozens of food growers, distributers and organizers from across the Miami Valley who are figuring out how to bring the farms we pass each day to the tables we eat at. And not just for the privileged few.

Headlining the summit is Will Allen, urban farmer and founder of Milwaukee’s Growing Power. Allen, who comes from a family of sharecroppers, grew up in housing projects in Rockville, Md. He played professional basketball and had a marketing career at Proctor & Gamble before moving to Milwaukee in 1993 to purchase the last farm within the city limits. He started Growing Power to increase fresh food access in the city and also to train others to create their own community gardens. The group makes 400,000 pounds of donated compost per day using spent grains from the city’s breweries. And it has an aquaponics operation that uses the waste from fish to fertilize vegetables grown on the surface of the water.

“He’s a change agent for Milwaukee,” according to Krista Magaw, executive director of the TLT. Magaw heard Allen speak at a Food Power conference in Wisconsin last year and feels very lucky to have him here next weekend. Growing Power now has a global reach and has garnered multi-million dollar grants from the Kellogg Foundation, the Ford Foundation and a MacAurther Foundation “Genius Grant.”

Here in the Miami Valley, Allen’s efforts are meant to inspire the work that has already started.

Jurick, for example, is part of BW Greenway’s Food and Farming Committee that is well on its way to establishing Fairborn’s grocery store. The committee, chaired by Doug Christen, who co-owns Smaller Footprint Farm in Yellow Springs, has found a former Fulmers manager who is interested in opening a new store. The community raised $80,000 to finance what Wright-Patt Credit Union’s loan would not, and the group is now waiting for loan approval to go ahead. While the business must be a full service grocery store, its owners are interested in being a local distributor of local produce and providing community services such as home delivery and discounts for seniors and military personnel, Jurick said.

Rob Jaehnig, who runs the Center for Innovative Food Technology at Wilmington College, is trying to connect local growers to bigger food distributors in order to make vegetable growing more economically viable, according to Magaw. Farmers need to know there is a market for their produce and a way to get that produce to the buyers.

“If farmers can make two times the revenue with a five-acre plot growing green beans as they do growing corn and soy, then they’re going to consider that seriously,” she said. “Farmers are interested in numbers and distributors’ parameters.”

Jaehnig’s aim is to establish a local food production and distribution center to replace the jobs that were lost when DHL, Wilmington’s biggest employer, closed in 2008. As a former employee of DHL himself, Jaehnig has a vested interest in his goal to create 10,000 jobs in 10 years at the DHL site, which has the water and electric necessary for food production. He will run part of Saturday’s workshop on connecting producers to distribution systems.

The summit also features Chuck Dilbone, the business manager of Granville schools who will talk about his work to bring fresh produce into the schools through food service provider Sodexo. Other workshops include creating urban jobs in agriculture, community gardens, establishing local food policy councils, and an information session on Market Maker, a service through the Ohio State University extension office that connects producers and buyers. The day before the conference is a day-long second annual Montgomery County Summit on Food Security and Access, with a focus on children’s health.

The aim of the local Food Power Summit is to both inspire local food organizers but also provide meaningful connections between local growers and distributors, Magaw said.

“This has been our theme this whole year, it’s kind of like Tecumseh Land Trust’s last big event,” Magaw said. “I want people to walk away feeling inspired and to get concrete contacts and resources to help them advocate for enough safe, healthy food for everyone.”

The Food Power Summit is Saturday, Nov. 5, 8:30–4:30 p.m. at Fairborn High School. Registration is required and costs $25. The Montgomery County Summit will take place the previous day, Friday, Nov. 4, 8–4 p.m. at the Salvation Army Corps in Dayton and is free of charge. For more information, go to http://www.tecumsehlandtrust.org.