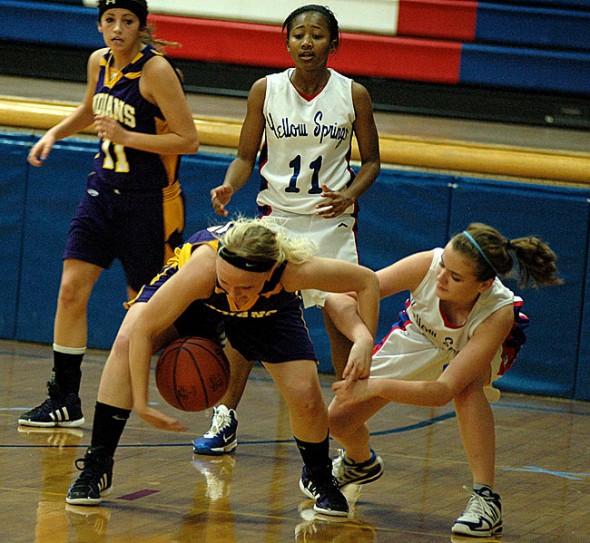 Kara Edwards strips the ball from a Mechanicsburg player while Brianna Ayers looks on during the Bulldogs' season and home opener. (Photo by Megan Bachman)

In their season opener at home, the Yellow Springs High School girls varsity basketball team lost 69–18 after falling behind 27–7 by halftime against visiting Mechanicsburg. Last year the Bulldogs went down by an even larger deficit.

The Bulldogs fought hard throughout the match against the Mechanicsburg starters. Maryah Martin and Angela Allen contributed five points each, while Brianna Ayers netted four and Kennedy Harshaw and Keturah Fulton each had a basket. 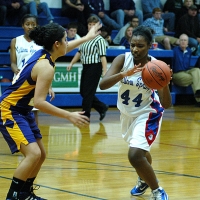 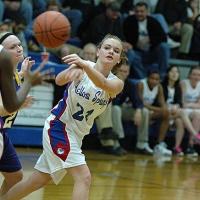 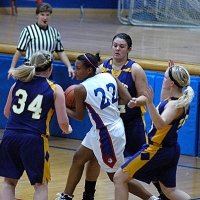 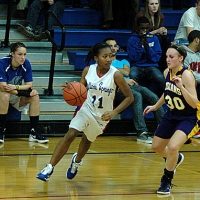 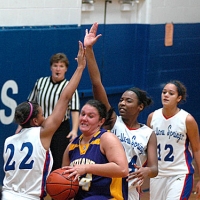 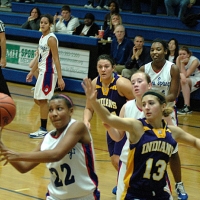 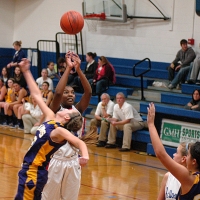 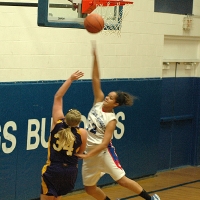 The challenge for first-year girls basketball Coach Tim Barga is how to turn a team of volleyball and soccer players into contenders on the basketball court, he said last week. Even though many of the girls consider the sport secondary, Coach Barga hopes to build a team and a program that can compete.

“We have some talent there, it’s just whether they want to get it out of themselves,” said Barga, a veteran coach with nearly 30 years of experience and close to 500 wins. Last year the girls team went 5–7 in the Metro Buckeye Conference (7–14 overall).

Running basic dribbling and passing drills in recent weeks, Coach Barga, who lives in Versailles, said he hopes to instill some fundamentals in the players and make sure they continue to improve throughout the season. With no seniors on the roster, Barga is already thinking about a bright future for the program.

“If I can get them to really like the game, then I think things will turn around for us,” Barga said.

The girls basketball team takes on Emmanuel Christian at home at 7 p.m. on Thursday.