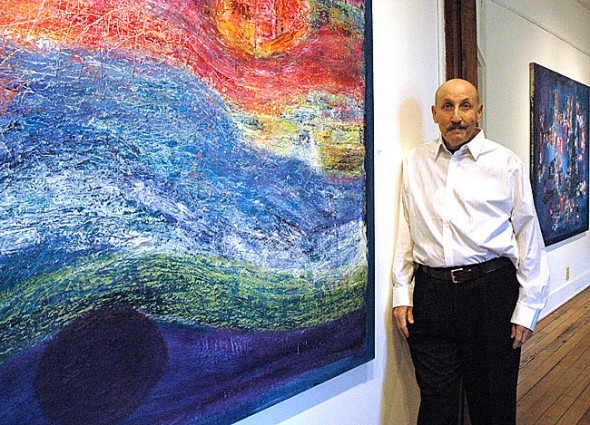 Local artist Ira Brukner is currently showing 17 of his brightly-colored, abstract paintings at a solo exhibit at the Miller Center for Visual Arts at Urbana University. The exhibit is open to the public Thursday and Saturday afternoons from 1–4 p.m. through Dec. 3, excluding Thanksgiving weekend. (Photo by Diane Chiddister)

The ‘ecstatic surprise’ of a painter

“It just happens,” he said of his process. “My paintings just happen. It’s a happy accident, an ecstatic surprise.”

The result of that process, 17 paintings that Brukner created between 2000 and 2011, are currently on display at a solo exhibition at the Miller Center for Visual Arts at Urbana University. Bruckner is described by a university press release as “the rare example of a self-taught/outsider whose imagery is entirely non-objective. His large powerful canvasses recall the Abstract Expressionist gesture painters of the 1950s, with whom he closely identifies.”

The exhibit, located at 518 College Way in Urbana, is free and open to the public Thursday and Saturdays from 1–4 p.m. through Dec. 3, although it will be closed Thanksgiving weekend.

If Brukner sounds likes a poet when describing his painting process, that’s not surprising. After getting a masters from Middlebury College, he had a long career as a poet and poetry teacher in New York and other cities, before his passion for writing poetry came to an end when he was living in Ithaca, N.Y.

“I lost the ability to write,” he said. “I couldn’t find the music and rhythms of poetry. I ran out of things to say.”

Losing his passion for writing poetry left Brukner without a creative outlet, until the happy accident of beginning to paint took place — and he remembers the date, Nov. 14, 2000. For no good reason on that day, he picked up a piece of “cerulean blue” pastel chalk and began drawing lines on a paper bag. And with that simple action, his life was transformed.

“I knew immediately that I was a painter,” he said. “And I knew I would keep doing it because I loved it.”

Brukner’s immediate identification as a painter wasn’t entirely unexpected. He had always loved art, he said, and made it a point to visit museums wherever he traveled and lived — and he has lived many places. So he’s seen great art in London, Amsterdam, Paris, Barcelona and New York City, among other places.

“I always look at painting as much as I can,” he said.

Especially, he found himself drawn to painters who focus on color, “mainly abstract, colorful paintings done so well that they glowed,” he said. “I always looked for the light coming out of the painting. Illumination is what I prized most.”

That focus on color resonated with Brukner, who has always “felt close to color. For a while I thought I was color.” While his favorite color is blue, “I like all of them,” he said.

During his painting process, Brukner feels himself in a trance. He’s not aware of trying to plan or control a painting in any way, he said, but rather follows his instincts. Sometimes paintings come quickly, and sometimes they take months, as he feels himself “lifted into other worlds full of color.”

Attracted by the sensuality of painting, Brukner also loves playing with textures. While he began his painting solely with acrylics, he was able to move into oils during the several years when he had a studio away from his home. Brukner said he prefers oils although he no longer uses them because he no longer has a studio. Most of the paintings in the Urbana exhibit are oils.

“Oils are lush,” he said. “They’re thicker than butter. They flow, and you can put many layers on, load it up if you like.”

His tools are many, Brukner said.

“I use all kinds of brushes, palette knives, all the tools available,” he said. “Sometimes I just use my hands.”

Born and raised in Jacksonville, Fla., Brukner initially studied literature when he went to the University of Florida, then he moved to Israel to study at Hebrew University. Back in the states, he traveled extensively and lived in a variety of cities, including San Francisco and then New York. In New York City he began getting published as a poet, and from these publications was able to find jobs teaching poetry.  Brukner came to Yellow Springs in 2001 in order to be close to his son, who had moved here.

While painting has been a focus of his life during his time here, Brukner has done little exhibiting of his work. But that changed when he recently asked villager Paul Cooper to take photos of his paintings, and Cooper showed the photos to Mark Chepp, whose wife is a curator at the Springfield Museum of Art. She included Brukner’s work in a show at that museum. Brukner’s paintings will soon join a traveling exhibit curated by Chepp.

Brukner is thrilled to show his work, although it’s not for sale. He prefers to keep his 50 or so paintings in his apartment, stacked up against the wall, so that he can look if he wants and can, as now, show them to others.

“I paint because it moves my spirit,” he said. “And so others can see them, and get what they can when they see them.”