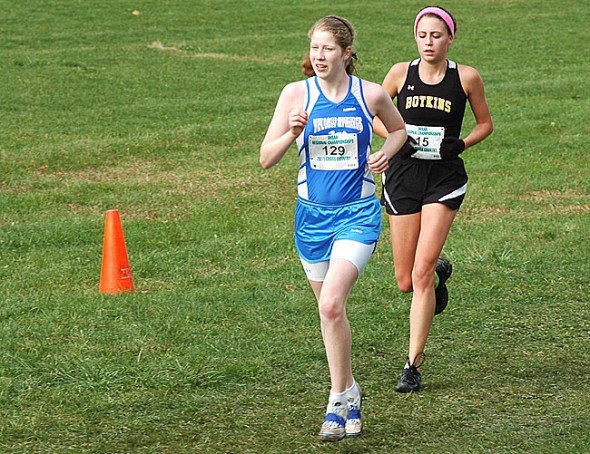 Junior harrier Lois Miller raced in the Ohio High School Southwest Regional Championships last weekend. She finished in 20:47, about 30 seconds shy of qualifying for the state finals for the second consecutive year. (Photo by Megan Bachman)

When state-qualifying runner Lois Miller toed the starting line at the beginning of the 2011 cross-country season, expectations were high. The junior went on to clinch a major invitational, record a new lifetime best, qualify for regionals and lead a young girls team to an 82–43 record.

But Miller was disappointed. She got a slow start to the season and, though she turned it around, lacked the confidence to qualify for the state finals at Saturday’s regional meet.

“I think it was mostly psychological factors,” Miller said of her 20:47 regional run. “I know I was in a position where I could’ve qualified out but I think I was really nervous. A huge part of the sport is mental, not physical.”

Miller ended 27th out of 128 runners at the Division III girls regional cross-country championships in Troy. In 2010, she placed eighth. The third-fastest female runner in Yellow Springs High School history, Miller is already looking to practice more next summer to improve upon her 2010 state finish of 43rd place.

“I’ll do more preseason running,” Miller said. “I had a disappointing first half of the season.”

Early in the season, Miller was running the 3.1 mile distance around 21 minutes. Everything changed at the Buck Creek Invitational in Springfield, where she cracked the 20-minute mark for the first time in 2011. Her 19:57 run was good for eighth place out of 148 runners.

“That was a breakout race for me,” Miller said.

Miller went on to win the 26th Annual John Bryan Invitational at Young’s Dairy in a lifetime record of 19:41 (though the course may have been slightly short) and qualify for regionals with a 20:34 time. But Miller had hoped for a better time at districts in order to propel her team to a regional berth.

“We were all hoping we’d go to regionals together,” Miller said. “We knew it was going to be close the whole time and that we had a shot.”

The team was competitive all year. At Buck Creek, the Bulldogs took sixth place out of 20 participating schools thanks to Miller’s fast run, lifetime bests by Alex Brown, Rachel Meyer and Talia Boutis and additional scoring by Christina Brewer, Zoey McKinley and Ashley Merritt.

It’s the first time Miller has run as part of a competitive squad during her high school career, she said. Her teammates have become an important source of motivation.

“It puts more pressure on you but on the flip side, it’s more motivating that if you do well, it’s not just for yourself, it’s for your team,” Miller said.

With Mary Triplett the team’s only graduating senior and middle school standout Charlotte Walkey joining the team next year, the 2012 season is looking bright.

“I think we have a lot of potential for next year,” Miller said.

But Miller knows that it will take more than talent to be successful.

“Our team is going to do more running in the summer,” she said.