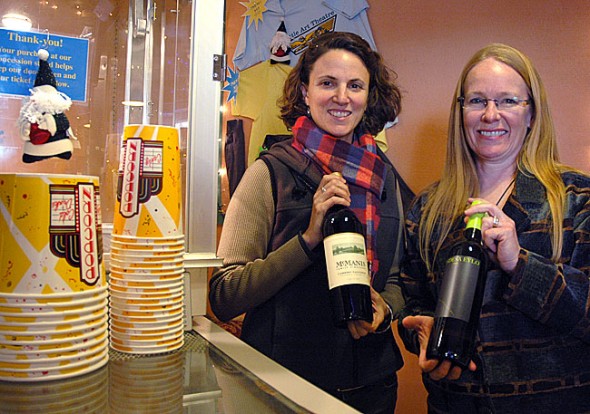 Little Art Theatre executive director Jenny Cowperthwaite-Ruka, right, and her assistant, Margaret Morgan, held up the wine that will soon be offered at the theater. The nonprofit recently received a license to sell beer and wine and will begin pouring drinks at a special showing of the film Sideways at 7 p.m. on Saturday, Dec. 17. (Photo by Megan Bachman)

A new toast to the Little Art

Little Art Theatre moviegoers can now pair their favorite snack with an alcoholic beverage. Imagine sipping a glass of red wine with malted milk balls, a chilled white wine with a butter bar, a beer with a tub of popcorn,  or, on special occasions, a signature cocktail — the “Little Artini.”

After a year of clearing state liquor control board hurdles, the tax-exempt nonprofit theater officially received its license to sell alcohol in October. The Little Art will begin pouring drinks on Saturday, Dec. 17, at a special 7 p.m. showing of the film Sideways, Alexander Payne’s 2004 film set in California wine country. Several wines from the film will be featured.

“This is just one way to enhance the experience of coming to a movie,” said Little Art Executive Director Jenny Cowperthwaite-Ruka last week. Having referred to the 80-year-old theater as “the community’s living room,” Cowperthwaite-Ruka said that offering alcohol is one way of being a more gracious host to the community.

“We’re always looking for ways to increase revenue because the operation runs at a loss without donations,” Cowperthwaite-Ruka said. Each year the theater must raise $50,000 to keep its doors open. The Little Art, which went nonprofit in 2009, currently raises that money from  special events and the 545 people with 359 memberships who are known as “Friends of the Little Art.”

Though donations are important, the theater’s “number one priority is to get people to the movies,” and offering beer and wine could help that, said Kipra Heerman, a Little Art board member. Heerman spent the better part of this year securing the license after working to pass a successful ballot initiative in 2009 allowing Sunday alcohol sales downtown (so the Little Art could serve drinks at its annual Oscar party).

Because the number of liquor licenses available downtown is maxed out, Heerman explored other avenues, including designating downtown as an entertainment district. In the end, the Little Art was qualified to sell drinks as a nonprofit community theater and community arts center, since it adorns its walls with art and has a stage for performances. Without protest from Village Council or nearby schools or churches  and after the liquor board approved the site, the permit was granted.

The Winds Cafe owner Mary Kay Smith, a Little Art board member, helped the theater choose its initial beverage offerings, which include McManis’ California Cabernet Sauvignon, a Spanish white blend from Condesa Eylo, three beers from Great Lakes’ Brewing Company (an India Pale Ale, lager and seasonal beer) and Bud Light. Lacking the facility for a full bar, cocktails will be reserved for special events. And without a three-sink setup, the Little Art must serve its drinks in plastic cups.

Little Art Board member Roger Reynolds said the liquor license may increase demand for event rentals. He envisions weddings, family reunions, poetry readings, benefits and other events that can utilize the sale of alcohol, the stage and the projection screen for home movies and slideshows.

Margaret Morgan, assistant to the executive director, said she isn’t concerned about bringing an intoxicant into the theater.

“People aren’t drinking here to get drunk, it’s not a bar atmosphere,” she said. Instead, Morgan said she believes offering alcohol will add to the uniqueness of an already unique theater.

“When people come into the theater, their eyes light up,” Morgan said. “This will be another thing they love about it.” The theater already serves signature snacks, such as its New York chocolates and homemade pastries, in addition to tea, coffee, soda and popcorn. Pretzel nubs will be added to the snack menu.

This will be the first time the Little Art will officially serve alcohol since at least 1978, when Cowperthwaite-Ruka arrived. The theater was quite different back then. Patrons brought their own food and alcoholic beverages, often kept their dogs in the aisle, and the room was  filled with cigarette and, sometimes, marijuana smoke.

The Little Art Theatre then added its concession stand in 1987. More recently, it began accepting credit cards for food and tickets and started a club card for frequent moviegoers called “Scene 10 – Take 1.”

As the Little Art Theatre strengthens its finances with new revenue sources, Cowperthwaite-Ruka looks forward to further theater upgrades, such as new seating and a digital projector. The pressure to go digital mounts as 20th Century Fox announced it will soon no longer offer 35-millimeter prints. And while last year just 33 percent of theaters globally had digital projectors, by January 2012, 63 percent will be digital, Morgan said.

Like the other changes, adding alcohol to the menu is “just another sign that the Little Art is thriving,” Cowperthwaite-Ruka said.