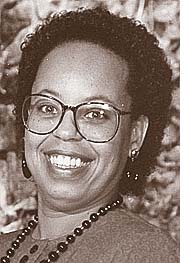 Bobbie was born on April 28, 1950, in Springfield to Robert and Fawn Duerson. She was raised in a home filled with love in Yellow Springs, with her two sisters, Gale (deceased) and Colleen. She accepted Christ at an early age and was baptized at Central Chapel AME Church.

Bobbie received her early education at Mills Lawn Elementary School and Yellow Springs High School. She graduated from Yellow Springs High with honors in 1968. After graduation, Bobbie attended a computer technical school in Dayton. She was one of the top students in her class, and was offered a job with General Motors upon graduation. She was a database analyst at GM from 1970 to 1980. After moving to California in 1980, Bobbie worked for the American Honda Motor Company for 30 years.

Bobbie married Joe Speaks in 1971. From this union came her first son, Jeffrey. In 1979, Bobbie met Phillip Jordan and fell in love while she was vacationing in California. She married Phillip on Oct. 29, 1988. From this union, Emmanuel Ammon (Manny) was born. Both sons were raised in Long Beach.

Bobbie will be greatly missed and fondly remembered by her family and friends. She will be remembered for her friendliness, fiery spirit, sense of humor, determination, enthusiasm, team efforts and positive attitude.

Services were held at the Inglewood Park Cemetery in Inglewood, Calif. on Nov. 19.