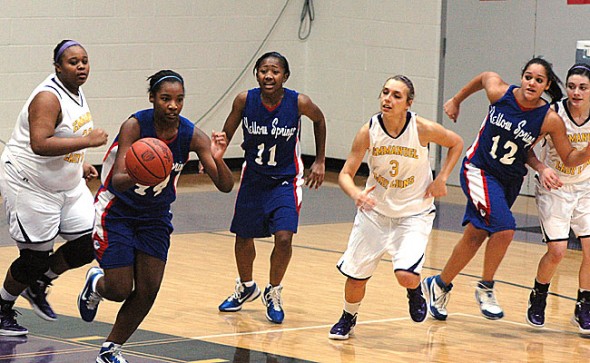 Bulldogs center Angela Allen ripped the ball from an Emmanuel Christian player and took it for two points during the YSHS girls varsity team’s 33–26 loss this week. Allen notched a double-double the previous week against Bradford, with 13 points and 13 rebounds. (Photo by Megan Bachman)

The Yellow Springs High School girls varsity basketball center Angela Allen had a double-double and another strong performance during this week’s games, which the Bulldogs narrowly lost.

YSHS had the talent to topple Emmanuel Christian this week, but struggled to capitalize on turnovers and shoot consistently from the floor. They lost 33–26 in Springfield to move their record to 1–3 (1–1 in the conference).

The team got off to a shaky start and fell behind 8–4 early in the first quarter before  Allen took matters into her own hands, drawing a foul under the basket and taking a steal the other way to add four points, all from the free throw line. The defensive duo of Brianna Ayers and Maryah Martin caused numerous Lions turnovers but failed to capitalize on the fast break and the Bulldogs couldn’t stop fouling their opponents. The quarter ended 12–10 in favor of the home team and they couldn’t catch their opponents throughout the rest of the game.

Earlier in the week, the Bulldogs hosted Bradford and lost, 44–37, after outscoring their opponents 8–1 in the final quarter and nearly pulling off a come-from-behind victory. Allen had a double-double with 13 points and 13 rebounds and added four steals. Fulton shot 57 percent from the field with eight points and Martin dished out seven assists and scored six points. 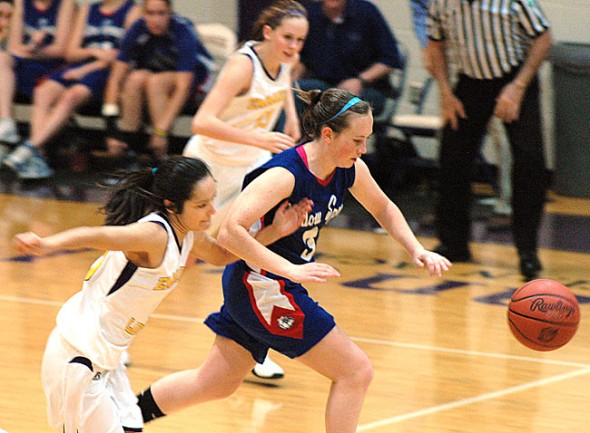 The Bulldogs lost narrowly at Troy Christian by a score of 46–41. Greg Felder Jr. and Roland Newsome paced the Bulldogs with 12 points each while Robbie Jones added nine.

At home against Bishop Ready from Columbus, YSHS fought hard but came up short, 55–47. Newsome lead all scoring with 16 points and 11 rebounds. Felder Jr. added 12 points and five assists.

Elizabeth Smith scored 31 points for the McKinney girls seventh- and eighth-grade  basketball teams on Monday, including 22 of the 23 points scored in the seventh-grade match.

The seventh graders lost 32–23. They played well, but crumbled under pressure at the end of the game, according to coach Evin Wimberly. Smith scored 22 of the team’s 23 points and teammate Julie Roberts hit one free throw on the night.