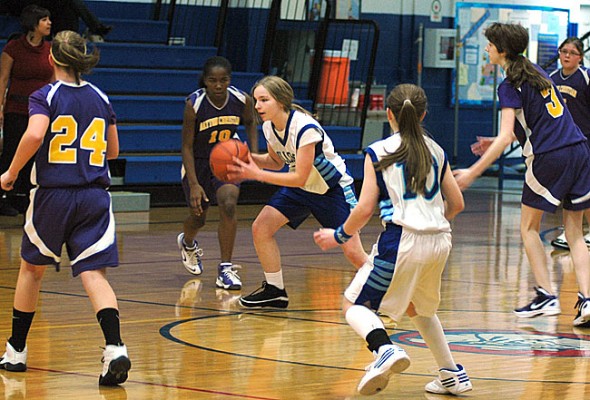 Anna Mullin, left, drove the ball down the court for the McKinney girls team while teammate Kaliyah Fulton worked to get open. Mullin and Fulton each scored four points in the team’s 21–12 victory over visiting Dayton Christian. (Photo by Megan Bachman)

The strong defense of the Yellow Springs High School girls basketball team kept the visiting Miami Valley Rams at bay this week. That is, until the fourth quarter. The Bulldogs, who had a 21–20 lead near the end of the game, were outscored 17–4 in the final stretch on a string of YSHS turnovers and some bad luck.

“I thought we played well pretty much the whole game up to the fourth quarter,” said Coach Tim Barga. Then the Rams scored two three-pointers and converted a free throw on a made basket that solidified their victory.

“That pretty well just cooked us right there,” Coach Barga said. “But we had three nice quarters against them. The whole team played nice, not just a few individuals.”

Earlier in the week the Bulldogs committed nearly 40 turnovers in their loss to Dayton Christian, 61–30. Maryah Martin led scoring with 12 points, including three three-pointers, and had four steals and three assists on the night. Angela Allen added eight points, 10 rebounds and four steals.

“I still think we had the better team,” Coach Barga said. “We’re getting easy shots, we’re just not putting them in.”

Part of the challenge for the team is its small numbers, Barga said. By the end of the third quarter many of the starters are winded and without a deep bench the Bulldogs have few options.

“When we don’t have enough kids out, it hurts us because we can’t practice,” Barga said. “By the fourth quarter we just don’t have the subs to put in.”

Last week the boys basketball team defeated Emmanuel Christian 66–43 and lost to Miami Valley 66–53 to move their record to 2–3 (1–2) in a season where the Bulldogs have scored more points than they’ve given up.

So far this season the Bulldogs have outscored their opponents 273–266. All three of the team’s losses were close games that could have gone the other way.

Newsome leads on the boards with 51 rebounds, or 10.2 rebounds per game and Felder Jr. has dished out 27 assists so far, an average of 5.4 per game.

Hosting Emmanuel Christian, the Bulldogs pulled out a 49–30 victory on the strong play of Kaner Butler, with 16 points, Rodman Allen, with 12 points and Devin Perry, who contributed eight points. The team went on to hammer Miami Valley at home, 51–22. Allen scored 16 and Perry and Isaiah Tayler each had 10 on the night, while Butler and Ethan Dewine scored six apiece.

Capping an exceptional week, the McKinney boys traveled to Dayton Christian and won 47–35 in a game. Kaner Butler alone scored 20 points for the Bulldogs with scoring support from Tayler (9), Allen (8), Perry (4) and J.T. Clark (4).

The McKinney seventh-grade team beat Emmanuel Christian 22–14 but later lost to Dayton Christian. They are now 1–2 (1–1).

The McKinney girls basketball team took on Dayton Christian last week in an unexpected double-header and split the games with the visiting foe. The Bulldogs won the first game 21–12. Elizabeth Smith put in eight points, Kaliyah Fulton and Anna Mullin each scored four points and Maya Creighton and Erica Ranard each contributed a bucket.

“The girls played through, despite the confusion,” Coach Wimberly said. Julia Roberts had three points in that game; Fulton, Smith and Longshaw added two points apiece, and Olivia Brintlinger-Conn added one point.