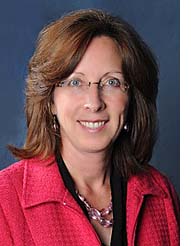 Village Council last week came to a contract agreement with Wilmington attorney Laura Curliss, who will soon start her position as the Village interim manager. Curliss will replace current Village Manager Mark Cundiff when he leaves in mid-February, giving Council time to search for and hire a new permanent manager. Curliss officially begins her job on Feb. 6.

Council officially approved the hire at its Jan. 17 meeting in a unanimous vote.

For the past six years, Curliss has served in a city management capacity as the executive assistant to the mayor of Wilmington. That job ended when Mayor David Raizk lost the election in November. Curliss recently accepted a part-time position as the assistant city law director for Hillsboro, where she will work one half-day a week, spending the remainder of the week with the Village.

Curliss replaces Cundiff, who has served as Village manager for a little over three years. Cundiff is leaving the village to take the manager’s post in Sidney, Ohio, where he and his family previously lived for nine years. Cundiff will assist with the transition before his last day with the Village on

Council plans to begin the search for a permanent manager next month and hopes to have the position filled sometime over the summer, according to Council President Judith Hempfling this week. The process will likely be similar to the one used in 2008, which engaged a consultant to help advertise the position, sort through applications and help conduct interviews. Curliss said on Tuesday that she hadn’t yet decided whether she will apply for the permanent position, which would require that her family move from their current home in Wilmington, she said in an interview this week.

Trained as an attorney, Curliss has always had an interest in administration, and as the full-time administrator in the mayor’s office, was “very involved in city administration and the day-to-day operations of the city,” she said. As a statutory city, Wilmington’s part-time mayor is the elected official who interacts with the city council to make official decisions, and Curliss “supported him by doing a lot of the work that the Village manager would do such as writing grants, developing a budget and working with the different municipal departments,” according to Village Council President Judith Hempfling.

“She is calm and confident, and with so much in transition, she brings strength and a steady energy I think is going to be very helpful,” Hempfling said this week. “And so much we do has legal implications, and it’s nice to have that expertise in house.”

Curliss’s last day in the mayor’s office is Jan. 27. Upon telling her friends and colleagues about her new position in the village, “they had nothing but praise for Yellow Springs,” where she and her family have come for many years to walk the Glen and bike path, attend street fairs and shop and eat in the businesses and restaurants. She is happy to be coming here to work.

“Yellow Springs is right on the cusp of being a city, but life in the village is pretty large,” she said. “It’s a big city in a small package.”