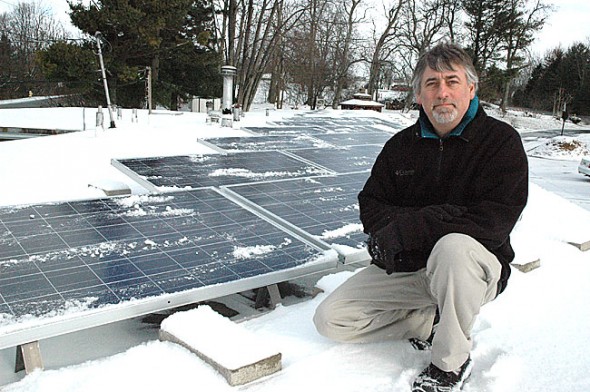 Eric Clark recently brushed off the snow from his new 20-panel solar photovoltaic array on the roof of the Springs Motel. The 4700-watt system will replace about 20 percent of the motel’s current electric load. (Photo by Megan Bachman)

More sun in the Springs (Motel)

The latest update to the Springs Motel isn’t in the rooms but on the roof, where 20 solar photovoltaic panels now power the televisions, hair dryers and air conditioners of motel guests. The 60-year-old byways motel on U.S. 68 just south of the village is getting a green makeover as much for its energy and cost savings as its image, according to Springs Motel owner Eric Clark.

The 12-room motel’s 4700-watt solar array will replace about 20 percent of its current electric load, Clark estimated. In a net metering agreement with Dayton Power & Light, the utility will give Clark credits for any excess power he produces.

Limited for years by the original 1950s structure, with its antiquated electrical system, minimal insulation and single pane windows, Clark decided last year to opt for solar panels and a new electric panel because of favorable financial incentives. He should recover his investment of $38,000 in about six to seven years, he said. Just five years ago, the same system would have cost $52,000.

Solar was especially attractive because of a federal tax credit, which expired at the end of 2011, and renewable energy credits that could bring in more than $300 in cash every other month, Clark said. And on especially sunny days the meter may spin backwards, giving the motel electricity credits to use at night or on cloudy days.

With the savings in hand in a few years, Clark may consider adding more panels or even a wind turbine, since the motel is located in an especially windy area. And he hopes to implement other energy-saving measures, such as keycard holders that turn off a room’s electricity when guests leave.

Since Clark purchased the motel, previously called The Anthony Wayne, in 2002 he has renovated several times. Most renovations, however, have been aimed at increasing guest comfort and attracting new clientele, not saving energy. And because guests often make more use of electrical appliances on the road than at home, the motel’s electric bill has been high. (Some guests have been known to use both the air conditioner and the electric heater at the same).

The solar system was designed and installed by Icon Solar Power of Mason, Ohio and uses American-made Sanyo solar panels. Clark first met representatives from Icon Solar at their booth at the Yellow Springs Street Fair and was convinced by the strong economic case and environmental concerns.

“My personal philosophy is that anything we can do to cut down on energy use is very important,” Clark said. “And for the business it gives us that marketing potential.”

Clark hopes the panels will bring more guests to stay at the hotel, which annually has a 55 percent occupancy rate but is mostly full on weekends from April through October. Over the years, occupancy has grown steadily and guests are staying longer, which signals to Clark that many are coming to enjoy the shops and restaurants of the village.

“We really encourage people to stay for two or three days,” Clark said. “It’s a huge economic advantage for the village when they do.”

Clark is not alone in the area in his pursuit of green energy. In recent years, Fred and Kathy Stockwell put up a 2500-watt wind turbine and solar array at their Yellow Springs-Fairfield Road home, village resident Pat Brown installed a 1119-watt solar array on her roof on Stewart Street and Harvey and Ruth Paige mounted a 3450-watt array in their backyard on Meadow Lane. The village will host its own 2.5-megawatt array on the village-owed Glass Farm on King Street in a power-purchase agreement with Solarvision that was finalized last year.