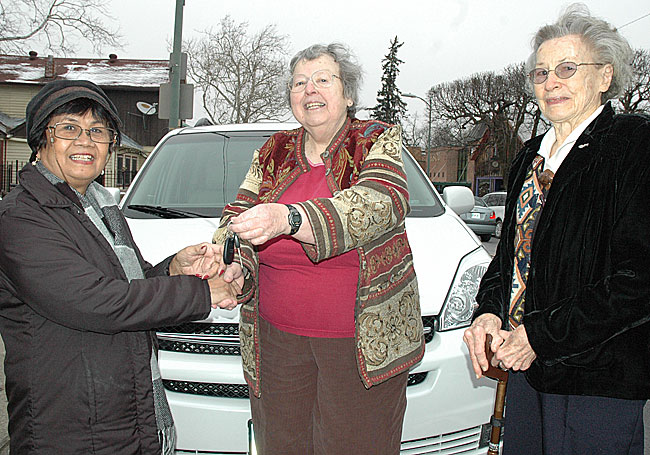 Alicia Erfe happily took the keys to the new 2004 Toyota Siena she won at a raffle at the Yellow Springs Senior Center. Handing her the keys is Barbara Mann of the Senior Center while Beth Hertz, who donated the car, looks on. (Photo by Megan Bachman)

Alicia Erfe had a 1 in 230 chance of winning the 2004 Toyota Siena mini-van that the Yellow Springs Senior Center raffled off as a fundraiser. In the end it took just one $100 ticket (and a bit of luck) for the New York City transplant to win the van. Erfe, who moved to Yellow Springs last year to be closer to family, will now be shuttling around her grandchildren in her new ride.

Other lucky winners were Jane Benham, who took the second place prize of $500, and Noah Adams, who won $100.

The Senior Center raised $16,000 in the raffle — as much as they would have selling the vehicle. And everyone benefited thanks to the generosity of Beth Hertz, who drove 43,000 miles in the van before donating it to the Senior Center. Hertz also donated another vehicle to the Senior Center, which has been added to its fleet of vehicles used to transport local seniors.