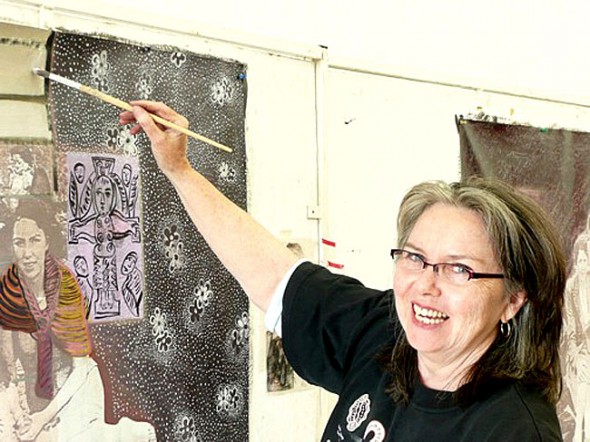 Patricia Cole of Bloomington, Ind., will be artist-in-residence at Antioch College until mid-February. She will give a talk on her work at the college’s Herndon Gallery this Sunday, Jan. 22, at 3 p.m. Her paintings will be on exhibit at the Glen House gallery beginning the end of January. (Photo submitted by Dennie Eagleson)

The revelation of being a painter

When she was an art student at Indiana University in the early 1970s, Patricia Cole spent a semester in Europe, in order to visit as many art museums as possible.

Cole, who lives in Bloomington, Ind., has been visiting museums, and creating her own art, ever since. Now in her fourth decade as a painter, Cole counts as influences Picasso, Russian painter Chaim Soutine and American Joan Brown. Her work, which has been described as “neo-expressionist” by some and as “odd and wonderful” by Antioch College Creative Director Dennie Eagleson, will be on display at the Glen House from Jan. 29 until Feb. 19, and beginning this month until mid-February Cole will be artist-in-residence at Antioch College.

She will give a public talk on her paintings on Sunday, Jan. 22, from 3-5 p.m. at the college’s Herndon Gallery, and will also speak at a reception for her work at the Glen House on Feb. 12 from 1–4. Cole will also hold a free drawing workshop on the investigation of identity on Sunday, Feb. 5 from 2-5 p.m. at YS Kids Playhouse on the Antioch campus.

Cole’s oil paintings — which can be seen at http://www.patriciacole.net — cover a range of subjects, including still lifes, landscapes, and increasingly, portraits of women. Many of the brightly-colored, deeply emotional paintings have a haunting quality, and they have all come from some aspect of her own emotional experience, Cole said in a recent interview.

“No matter what I’m painting, I’m painting myself,” Cole said. “It could be flowers, or a portrait of another person. But it’s important to me to recognize that.”

Some of Cole’s work focuses on war and death, and reflects her own experience as a child coming to terms with early loss. Born in Ireland of an Irish mother and American GI father near the end of World War II, Cole as a young child encountered death up close when her father was killed in the war. She and her mother came to live with her father’s family in Kentucky, an experience that was the first of many in which Cole felt like an outsider. Growing up, she sought some form of creative expression in order to express that sense of dislocation.

“I never quite fit,” she said. “I always knew I would find some mode to find my own voice.”

Cole was an art student at Indiana University focusing on ceramics when she had to take a class in drawing to meet requirements. There, she was told by her instructor that she had a talent for painting and should do more of it, and slowly she began to do so.

It was hard in the early 1970s to see herself as a painter, Cole said. Most models of painters then were hard-drinking men with a self-assurance she didn’t possess. They were certainly not women who had children, which she hoped someday to be (she now has two grown sons). But gradually she began to feel more confident, and after receiving a bachelors in fine arts from IU, she went on to get a MFA in painting from the Maryland Institute College of Art in Baltimore.

“I found I have a facility for painting,” she said. “That was a revelation, a gift.”

Cole’s career as a painter has included solo and group shows at a wide variety of locations, and most recently she was an artist-in-residence at the University of Johannesburg in South Africa, where she lived with her husband, Antioch Alumni Board member David Thelen. Her awards include a 2001 Carnegie Prize for Painting from the National Academy of Design in New York City, grants from the Indiana Arts Commission, and Best in Show awards from several midwestern art shows. She also taught art at the Heron School in Indianapolis.

Cole’s painting has evolved, and sometimes now she explores ideas along with personal history, she said.

“And sometimes to get my head clear, I’ll do a still life,” she said.

Whatever her subject, Cole has no doubts now that she is, in fact, a painter.

Cole and Thelen are living in Yellow Springs for the five weeks of her residency, during which Thelen, a historian, is teaching a course on “Antioch Stories” at the college.