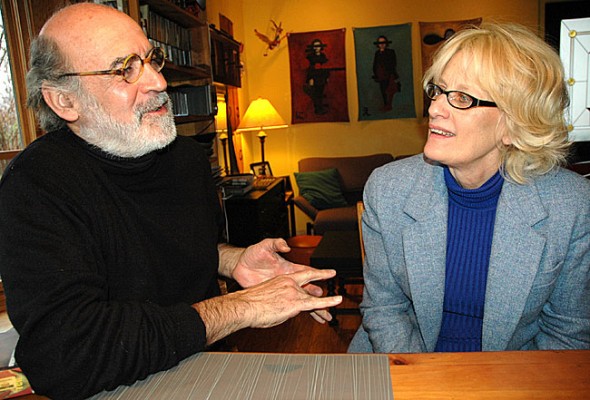 Local director Tony Dallas will direct Eleemosynary at the University of Dayton's Boll Theater this weekend and next. He's shown here with local actor Marcia Nowik, who plays a lead role.

Villager Tony Dallas, an actor, playwright and director, is directing Eleemosynary at the University of Dayton this weekend and next. The one-act play, by Lee Blessing, features local actor Marcia Nowik as a lead character.

Eleemosynary focuses on three generations of strong and independent women, a grandmother, mother and daughter, who are attempting to navigate the disappointments between them, as well as understand the gifts that one generation passes on to the next. The matriarch, Dorothea (played by Nowik) is an eccentric who is estranged from her daughter, Artemis, a brilliant scientist. Dorothea has been raising Echo, the daughter of Artemis, and the girl attempts to bring her mother and grandmother together at a spelling bee, in which she’s a contestant.

“I wish every mother could take her daughter to see it,” Nowik said in a recent interview, although she also believes that, while the play focuses on the three female characters, “I don’t think it’s only a woman’s play. I think it’s bigger than that.”

For more information about the UD performnces, contact the box office at 229-2545.