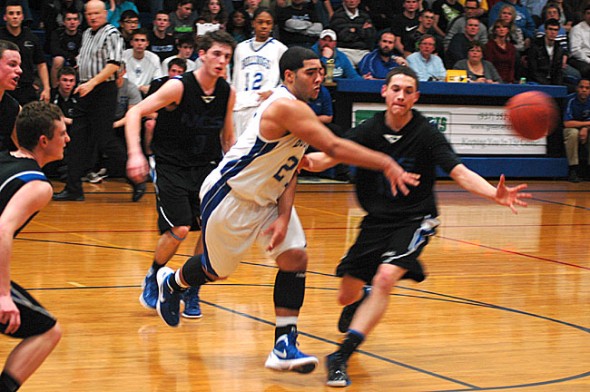 Junior Robbie Jones played his best game of the year during the Bulldogs’ rematch against Middletown Christian on Friday. Jones, here dishing out the ball after driving into the paint, was dominant on both sides of the court and led scoring for the team, with 17 points. YSHS won the game, 64–59, after losing to Middletown Christian in double overtime on Jan. 13. Visit www.ysnews.com for more game photos. (Photo by Megan Bachman)

For the first time all season, the Yellow Springs High School girls varsity basketball team has a winning record after taking down three teams this week. The Bulldogs improved to 8–7 overall (.533) after starting out just 1–5 (.167). They have now won four straight games in the Metro Buckeye Conference, where they currently hold third place.

Belmont was the first victim of the Bulldogs, who won 35–27. After a slow start, the team pulled away in the third quarter to seal the victory. Center Kennedy Harshaw dominated the boards, with 11 rebounds, and also led scoring for her team, with 14 points. Angela Allen added six points and 11 rebounds, Maryah Martin had seven points, and Brianna Ayers contributed three steals.

Later in the week, YSHS lit up the scoreboard against Middletown Christian, 50–27. Angela Allen turned in a dominant double-double with 18 points and 14 rebounds. Maryah Martin had 14 points, four steals and five assists. Martin is currently eighth in the Dayton area in assists, averaging 4.6 per game. Kara Edwards and Kennedy Harshaw chipped in 6 points each.

Finally, the Bulldogs hung on to defeat Troy Christian in a close one, 33–29, to improve to 5–3 in the conference.

The Yellow Springs boys basketball team regained some pride on Friday as they cruised to a 64–59 victory over visiting Middletown Christian just two weeks after falling to them in a devastating overtime loss.

Despite a 25-point Bulldog lead and 46-point performance from YSHS forward Roland Newsome, YSHS lost 93–89 in overtime to Middletown Christian on Jan. 13. This time it was all Bulldogs. The home team, in front of a packed house, charged out to a 31–18 halftime lead on a last second basket by Liam Weigand.

But a 20-point third quarter by Middletown Christian cut the Bulldogs lead to eight and with just three minutes remaining in the contest, the visitors had gone ahead by three. Then, with one minute left, Jared Scarfpin knocked down a three-pointer to put his team up by two, Cole Edwards put in back-to-back free throws and Newsome added another three pointer to seal the victory.

Robbie Jones played his strongest game of the year, finishing with 17 points. Newsome added 16 points and nine rebounds. Newsome is the Dayton area’s fourth leading rebounder this season, averaging 11.3 per game. Edwards brought down a double-double with 11 points and 11 rebounds and Greg Felder Jr. and Antone Truss had eight point each.

Unfortunately, the Bulldogs couldn’t carry their momentum into the following night’s contest against Bradford. They fell in yet another close game, 52–48. The teams were tied at 29 at the start of the fourth quarter, but the Bulldogs couldn’t keep their opponents off the scoreboard, giving up 23 points in the final quarter of play.

Only four Bulldogs scored on the night. Newsome had the bulk of the team’s points, with 26, Greg Felder Jr. contributed 18 and Edwards and Jones each put in two points. Felder Jr., who is ninth in the area in blocks, with 1.8 per game, added another one during the match. The team is now 4–10 on the season (3–4 in conference play).

See more photos from the Middletown Christian game at ysnews.com.

Bulldog swimmers won multiple titles at the Metro Buckeye Conference Championships as they continue to improve in preparation for the end-of-year run up to states.

The 200-yard freestyle team (Chick, Malone, Zoey McKinley and Rachel Meyer) had a season-fast time of 2:02.94 and came in second in the conference. They also finished the 200-yard medley relay in third place with a time of 2:13.98.

With strong performances this season, Chick and Malone are on swimming honor rolls in the Dayton and Springfield areas. For the Springfield area, out of eight total individual events, they are number one in three events and among the top three in six events.

Disappointment continues for the McKinney seventh- and eighth- grade basketball team, which lost another close game last week. The combined team lost to Middletown Christian, 28–24, as Elizabeth Smith had 22 points and Julie Roberts added two. Together, they are 0–5.

The seventh-grade team stepped up to defeat Troy Christian 29–20 in a rematch with a team that beat them in double overtime earlier in the season. Their record is now 2–4. Smith had 27 of the team’s points and Roberts had two. But the eighth grade team couldn’t follow suit, losing 43–17 to Troy Christian to fall to 0–6. Smith scored most of the team’s 15 points, all during the fourth quarter, and Ashley Longshaw added two.

The eighth-grade boys basketball team won in double overtime this week to keep an unblemished conference record. They are now 10–0 in the MBC.

At Troy Christian, Rodman Allen hit back-to-back three pointers at the end of regulation to send the game to overtime. Isaiah Taylor was also clutch from behind the arc, scoring two three-pointers in the third quarter to give the Bulldogs a five-point advantage going into the final stretch. In the second overtime, the Bulldogs pulled ahead, winning 40–37. Allen finished with 18, Taylor had 11, Kaner Butler had 5 points and J.T. Clark and Ethan Dewine scored two each.

The seventh-grade boys basketball team took down Middletown Christian this week, 36–19, in a great example of team play. Hayden Orme controlled the tempo of the game by calmly setting up the offense while knocking down open jumpers when left alone. He finished with 10 points. Center Joe Plumar dominated the paint, scoring the Bulldogs’ first nine points of the game. Akeem Truss put pressure on the Middletown Christian guards by penetrating the lane and finishing at the rim. He added 15 points for the night.

The Bulldogs were strong off the bench as well. Guards C.J Johnson and Landon Rhoads put pressure on defense while being aggressive on offensive. Landon Rhoads knocked down an open jumper to keep the Bulldogs momentum going into the fourth quarter. And backup center Jordan White collected six rebounds off the bench.