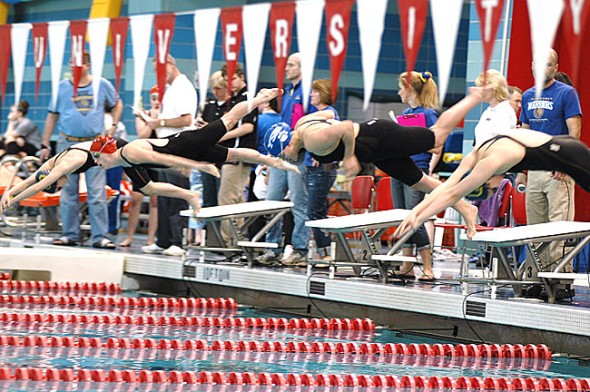 Erika Chick, second from right, took off from the starting block in the 200-yard freestyle race at last Saturday’s district finals in Oxford. Chick finished in second place with a season-best time of 1:52.17 in the event, which earned her an automatic state berth. Elizabeth Malone placed first and fourth in her races and will also swim at the state finals this week. (Photo by megan Bachman)

With collegiate scholarships in hand, the district finals were all about pride for senior Bulldog swimmers Elizabeth Malone and Erika Chick. And they didn’t leave disappointed. The duo qualified for the state finals in their individual events for the fourth year in a row while putting their names to three new school records.

At the Southwest Ohio Division II district meet, held in Oxford on Saturday, Malone defended her district title in the 100-yard butterfly, finishing in 56.58, a lifetime best and a new school record. Last year she finished in fourth place in the state finals in the 100 fly with a time of 57.41. Malone automatically qualified for states with the performance.

Chick was the runner-up in the 200-yard freestyle at districts. Her season-best time of 1:52.17 earned her an automatic qualification for this week’s state finals. Though she didn’t take first place, Chick’s district record time of 1:51.61 in the race, from the 2010 meet, still stands as the meet record. Last year Chick took fifth at states in the event.

In addition, Chick took fourth in the 100-yard freestyle with a time of 53.40, a lifetime best and new school record, and will swim the event at states. Malone’s lifetime-best, fourth-place finish in the 200-yard individual medley (2:09.22), was fast enough to qualify for states as well. Malone came from behind, winning the second heat in convincing fashion, to qualify.

“They’re both very focused, they know what they need to do and they work hard,” said swim team coach Kara Jacobs of Chick and Malone. “It’s a tough sport because it’s so mental. They really stayed strong and positive.”

Sophomores Zoey McKinley and Rachel Meyer joined Chick and Malone in the 200-yard medley relay and came in 19th place in 2:08.21, their fastest of the season. They dropped their time by five seconds from the sectional meet, as both McKinley and Meyer raced their fastest splits of the year.

Jacobs said that the young swimmers Emma Romohr, Connor Gravely-Novello and Ashley Merritt “improved tremendously over the season” and finished with respectable times for first-year swimmers. And they enjoyed the season despite evening practices that went until 10:30 p.m. on school nights.

Chick and Malone will swim at Division I colleges next year after their final shot at a state championship this week.

Visit ysnews.com for more photos from the meet.

Girls bball bows out in tourney

The girls varsity basketball team lost to Mississinawa Valley in the tournament this week to conclude their season. But there were some upsides to a somewhat disappointing final stretch of the season for the team. The entire roster will return, plus they were solid defensively, according to first-year coach Tim Barga. Coach Barga sees much to build on for his team, which finished 8–12 (5–7) and lost its tournament game last week.

“We had very good athletes, good ball players, and they hustled,” Barga said.

The season, and the tournament, came down to foul shots, Barga said. The girls lost four or five games from the stripe this year, including their first round tournament loss to Mississinawa Valley. The Bulldogs went on a 7–0 run after being down by 5–2 early in the game before giving up a nine-point run before half time. They went into the locker room down 19–13 and lost 39–31.

Before ending their regular season on a five-game slide, the team went on a 7–2 run. All year they rebounded, blocked and marked their opponent’s leading scorers well, ran their plays and worked hard, Barga said. But with only eight players on the roster, it was difficult to simulate game situations in practice.

Maryah Martin led the team from the point and provided leadership for the squad in the absence of any seniors. She was second in the conference in assists, with 4.8 per game. Defensively, Angela Allen and Kennedy Harshaw held down the post positions. Allen averaged 8.9 rebounds per game (fourth in the conference) and shot 42.3 percent from the floor. Brianna Ayers was aggressive marking on the wing.

With 494 career wins, Coach Barga hopes that next year he can reach a 500-win milestone with the Lady Bulldogs.

Going into next week’s tournament game, the boys varsity basketball finished out the regular season 1–2. Their record of 6–14 (5–7) was not what Coach Brad Newsome hoped for, but the season can be saved by making some headway in the tournament, he said.

“If we can use our regular season as a learning experience and it provides the growth that we need to do well in the tournament, I’m fine with it,” Newsome said. The difference has been defense, he added. The team was unable to make key stops during their games and as a result, lost 12 of their matches by nine points or less.

The Bulldogs had a season-high 86 points in a win against Emmanuel Christian last week, even though they trailed 32–43 at the half. Newsome put up 30 points, Greg Felder Jr. had 16 and Cole Edwards scored 14. YSHS then lost to Miami Valley, 57–51, as the team struggled to shoot and rebound. Newsome led with 15 points and Felder Jr. added nine. At Bethel, a top ranked division III opponent, the Bulldogs fell 53–43 after cutting the lead to four points with three minutes remaining. Newsome scored 20 points and Felder Jr. finished with 15.

In the tournament, YSHS goes up against second seed Tri-Village, who ousted the Bulldogs from last year’s tournament, 62–43.

After an undefeated regular season, the eighth-grade boys basketball team looked to take the Metro Buckeye conference tournament to go along with their conference championship. And they hoped to extend the team’s 25-game conference win streak.

Against Dayton Christian in the conference finals, the Bulldogs went up by nine points at the half before losing the lead, and the game, in the last two minutes on turnovers and lost rebounds. The Bulldogs scored just one point in the fourth quarter. They lost 42–38 to see their conference win streak came to an end.

“It was a great game and a great two-year run,” said Coach Craig McCann, adding that though he will miss them, he’s confident his players will next year, as freshman, have a chance to bring the title back to YSHS.

“And I believe they will,” he said.

The McKinney seventh-grade girls basketball team ended their season in the second round of the MBC tournament. They lost to Emmanuel Christian 45–30. Elizabeth Smith scored 28 of the team’s points and Kaliyah Fulton added two points.

“I had a lot of fun with these girls and am proud of how they finished the season,” said coach Evin Wimberley.