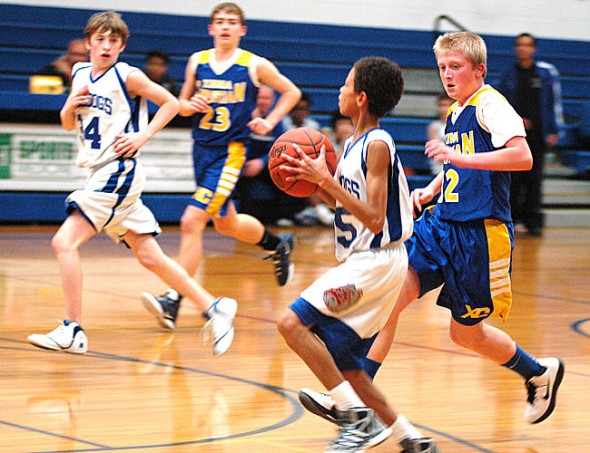 Guard Christian Johnson took a rebound down court before passing off to his teammate Hayden Orme on the seventh-grade boys basketball team. Johnson led scoring with four points during the team’s 44–10 loss to Xenia Christian last week. Visit www.ysnews.com for more photos from the game. (Photo by Megan Bachman)

The Yellow Springs High School boys varsity basketball team pulled even in the Metro Buckeye Conference this week with a dominating 83–51 win over Xenia Christian. The boys move up to fourth place in the MBC with a 4–4 record (5–10 overall).

Guards Roland Newsome and Greg Felder Jr. together outscored the entire Xenia Christian team in the first half. They ended with 28 and 26 points, respectively, and were punishing from both beyond the arc and at the rim. Their dominance pushed YSHS out to a 24-point halftime lead.

Senior night was another opportunity for YSHS standout swimmers Elizabeth Malone and Erika Chick to showcase their talents in the pool. They were honored in their final season as Bulldog swimmers before going on to take first place in their events.

Malone won the 100-yard butterfly, in 1:00.50 and the 200-yard individual medley in 2:18.28 in the meet against Springfield Catholic Central. Chick took first in the 200-yard freestyle (1:59.26) and the 500-yard freestyle (5:35.34). Chick and Malone now eye their fourth straight trip to the state swimming finals. The first step is qualifying for districts at next weekend’s sectional tournament.

After a 7–2 run over the last month and a five-game conference win streak, the girls varsity basketball team dropped three games this week, including two in the conference, to fall to 8–10 overall.

Out of conference play, the Bulldogs traveled to London and lost, 51–34, though the game was close throughout. Center Angela Allen led scoring with 14 points, team assist-leader Maryah Martin dished out nine on the night and Brianna Ayers brought down 13 rebounds.

At Xenia Christian, the Bulldogs lost their first MBC game since Dec. 17. The Bulldogs lost 44–38, after having defeated Xenia Christian by a three-point margin earlier this month. Martin led scoring with 14 points. Ayers contributed 10 points and eight boards and Angela Allen scored eight. In the supporting cast were Kennedy Harshaw (10 rebounds, 2 points) and Kara Edwards and Keturah Fulton, who each contributed a field goal.

YSHS was smoked by undefeated conference leader Miami Valley, 51–14. Miami Valley’s star player went for 26 points. Meanwhile, Martin scored eight points, Allen had four and Edwards made a field goal. Though Xenia Christian is nipping at the Bulldogs’ heels in the MBC standings, YSHS is still in third place with a 5-5 record.

“These girls played hard the whole game – I was very proud of them,” said Coach Evin Wimberley. The eighth-graders had a harder go, losing 33–4. Smith had all four points.

Together the seventh- and eighth-graders went on to defeat Miami Valley, 26–20. Smith led with 22 of the team’s points and Kaliyah Fulton and Welsh both scored two.

The eighth-grade boys basketball team added two more wins this week to their undefeated conference record. They are now 12–0 with one game remaining in the regular season.

Two weeks ago, the McKinney seventh-grade boys basketball team put together a stunning comeback win at Emmanuel Christian, and last week they pulled together as a team to defeat conference foe Middletown Christian. This week, despite spirited play, the boys fell 44–10 to visiting Xenia Christian.

Guard C.J. Johnson led scoring with four points, while Akeem Truss, Charles Moran and Landon Rhoads contributed two each. The team struggled without its center, Joe Plomar, who will miss the rest of the season with a broken foot, according to Coach Bradley Benning-Clark.

“Joe’s presence is tremendously missed,” Coach Benning-Clark said. “But other guys will step up and I do believe we will end this season strong.”

Visit https://www.ysnews.com for more photos from the game.