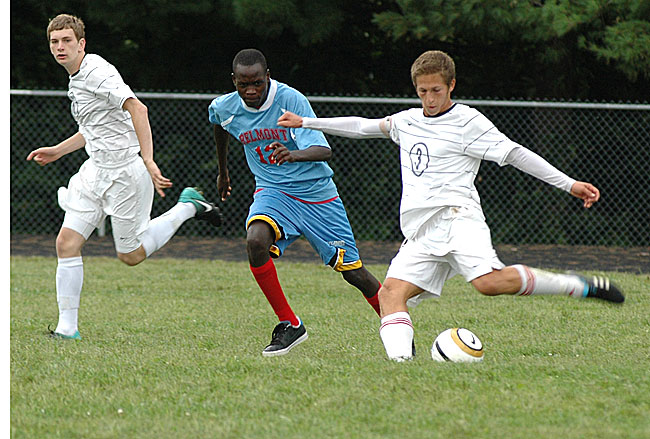 Senior Jacob Trumbull will play soccer next year at Centre College, a Division III school in Danville, Ky. In his final season as a Bulldog, Trumbull scored 35 goals, the ninth highest in Ohio. (Photo by Megan Bachman)

Jacob Trumbull holds an indelible image of himself from his early soccer career as a young boy crying at the window of his parents’ car on a rainy day because his game was cancelled.

“That about sums up my love of soccer right there,” Trumbull said.

The Yellow Springs High School senior committed last week to play soccer next year at Centre College in Danville, Ky., the culmination of more than a decade playing for local recreational, club and school teams.

“I’m just glad my legs can get me a good education,” he said.

A three-year team captain, Trumbull capped his high school career last fall by finishing ninth in Ohio in goals scored. He netted 35 in 17 games, earned first-team all-district honors and led his team to the district finals for the fourth year in a row.

Next year Trumbull will have big cleats to fill at Centre College, a Division III school and member of the newly formed Southern Athletic Association, where his coaches are expecting him to produce.

“Jacob is a big recruit for us, especially with the graduation of several proven goal scorers from this year’s team,” said Centre’s head coach Jeb Burch. “His attitude, skill, and engine to score is hard to find. I am confident Jacob will come in and help us immediately next fall.”

Trumbull received a partial four-year scholarship for both athletics and academics at Centre. As a scholar, he’s a top student at YSHS with a 3.6 grade point average. As an athlete, the left-footed Trumbull is not only adept at finding the net, he’s clever with the ball and can play anywhere on the field.

When he was a YSHS freshman, Trumbull started in goal behind an experienced group of upperclassmen. That the seniors put their trust in him as their goalie fueled Trumbull’s confidence. He was the go-to goalie for penalty kicks and, at the sectional finals during his junior year, saved a PK before netting one at the opposite end and saving a third.

Trumbull went on to play every position, but particularly excelled at left forward. There Trumbull was not afraid of physical challenges and masterful at beating defenders one-on-one with his quick dribbling to put in a cross or shot on goal. His signature move is passing around a defender, then beating that defender upfield to retrieve his own pass.

Despite his stellar individual play, Trumbull also knows what’s best for his team. A turning point in his soccer career came at about age 11, when then FC Springs coach Jim Hardman pulled the young Trumbull aside for some advice. Hardman, who later was Trumbull’s high school coach, admonished him for being selfish with the ball.

“That was the first time I realized it wasn’t about me, it was about the team,” Trumbull said. He went on to become a true team player, which he said comes with playing every position.

“I just like to be successful and have a team that’s successful,” he said.

Trumbull’s goals at Centre College are to earn the trust of his teammates, lead the team to a conference championship and eventually rise to team captain, he said.

“I want to prove myself, work hard, and hopefully produce on the field — get some goals and assists — and, most of all, win,” Trumbull said.

From the early Yellow Springs recreational program, to FC Springs, the local club team, to the regional club powerhouse Metro FC Rapids, of Dayton, the key to Trumbull’s success has been getting fit, staying healthy, practicing hard and keeping a competitive drive, he said.

Trumbull credits his coaches, teammates and the Yellow Springs community for the support needed to rise to the collegiate level. And though sports can be a ticket to higher education, academics come first.

“It’s good for young kids to know that athletics can get you a good education, but it’s better to dock on academic success than athletic success,” he said.