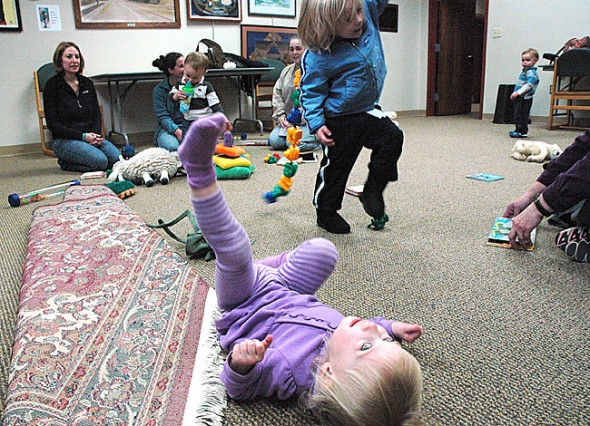 The Yellow Springs Library hosts a toddler story hour every Thursday from 2–3 p.m., one of the many ways in which the village supports gatherings for families and their young children. Last week Paige Clark and Alex Finney, foreground, hung out with Ann Fay and her son David, Laura Funderburg and her son Carson, and Carrie Finney and her infant son Tommy. See more photos at bottom of post. (Photo by Lauren Heaton)

Village a good host for babies

When Laura Funderburg had her son, Carson, now almost 2, she knew she wanted to raise him in Yellow Springs. She grew up in Springfield, but her family’s home on the Funderburg Farm in the village was a better fit for the way she wanted to raise her son. And the warm community of parents and children she has found in the village erased all doubt in her mind that she made the right decision.

“I wouldn’t want to be anywhere else,” she said in an interview last week.

Chad Stiles, a father of two young boys, feels the same way about the village as a home for his family. Stiles grew up in Yellow Springs and left town for school and work, and returned about six years ago when he was ready to start a family. The supportive and open community that he and his partner, Jenn Reid, found here for their children — Isaac, 5, and Nalin, almost 2 — has been worth the bit of hardship they have had finding a house they can afford. But because they like the village as a place for their kids so much, they are committed to making it work and are now looking for a home to buy.

The number of young families with children in the village seems quite strong and steady to villager Eric Clark, who raised his son Lonya as a single parent and is now raising his daughter Paige, nearly 2, with his partner, Jackie. They are expecting another son, Levi, this spring.

While the village has a number of opportunities for young children to socialize together, Clark noticed that the options are so disparate that they can sometimes be isolating. So he had an idea to gather all of the babies within three or four years of the same age for a party once a year to get a headstart on getting to know each other and each other’s families.

Since it is likely that many of those babies will grow up and go to school together for the next 16 years or so, the Clarks will again host the second annual “pre-graduation party” for all the babies currently 0–3 years old (or so) this Sunday, Feb. 5, 10 a.m.–noon at the Bryan Center gym. The play and social event will include kid and adult snacks, a clothing and toy exchange and the filling of a time capsule, and participants are invited to bring a beverage, a keepsake for the time capsule and their favorite toys. Siblings and newborns are also welcome. Call the Clarks at 361-6581 with questions or check their Facebook page for “baby party” information.

“It was a stupid idea that came to me after having a martini one evening — it’s overly quirky, but really, until the kids are old enough to go to school, it can sometimes be hard to get them together,” he said.

Yellow Springs has continued to support a steady number of families with young children, including an average of 25 local residents who give birth to new babies each year. According to Ohio Department of Health Vital Statistics data, there were 24 resident births in Yellow Springs in 2011, 25 in 2010, 22 in 2009, 23 in 2008, 25 in 2007 and 28 in 2006. That data is somewhat comparable to the number of Yellow Springs children who enrolled in the village’s public school system during those same years. According to Yellow Springs school records, 29 village children attended kindergarten at Mills Lawn in 2006, followed by 32 local kindergartners in 2007, 28 in 2008, a spike of 40 in 2009, and 34 in 2011.

Stiles for one feels grateful and lucky to be among the families with kids in the village. He believes strongly in getting his children outdoors, and he appreciates being able to go to the Glen, hop on bicycles or just take a walk in the neighborhood without having to drive or “have it be a production.” His family lived in Cincinnati for a short period several years ago, and they deliberately chose to give up access to “city things” in order to gain access to a more child-friendly community, whose members respect and take time to interact with children, he said.

“Isaac will just talk to people on the street, and people are never dismissive, they take the time to engage with him,” Stiles said. “It’s something that’s hard to quantify. If you were looking at Money magazine’s best towns, it would focus on more quantifiable stuff like safety statistics and the number of libraries per capita (which we have too!). But how do you quantify the number of people in town who know Isaac and would talk to him and take care of him if, god forbid, he got lost?”

Stiles and Reid have received support from a group called the YS Mamas and a network of young families who provide meals for those with newborns. They also appreciate the number and variety of early schooling options available in the village, including two Montessori preschools, one for infants to toddlers with teacher Martha Werner-Brown and one for toddlers and up at the First Presbyterian Church. Yellow Springs also offers preschools with Friends Head Start program, the Children’s Center, and at least four private in-home toddler care groups.

The village also offers weekly play groups at the Bryan Community Center and the Yellow Springs Library, mostly for play and socialization time, which Clark finds invaluable. He finds the winters especially difficult times for Paige to find other toddlers, and she needs the social time in order to keep developing and learning critical skills like sharing, he said.

“Up to age 3 most kids get that only child syndrome really bad, where ‘everything’s about me,’” Clark said. “They don’t understand until they start experiencing things done unto them as they have done unto others. That’s how they learn, by imitation.”

Paige also attends the YS Kids Playhouse Kindermusik series with Jill Becker, who taught the kids how to creep like a cat. Then Paige crawled like a cat at one of the play groups, and the other kids immediately began to move like cats too.

Funderburg had a similar experience with Carson, who had taken up the destructive habit of “climbing” down stairs by simply approaching the edge and “stepping off.” Then he went to a play time at the Bryan Center and watched the other kids turn around before going down steps, and the next thing she knew he was crawling backward down the steps at home.

Funderburg likes the openness in the village and feels that she can talk to people about breast feeding, attachment parenting and co-sleeping and not feel awkward or criticized, as she believes she would be in communities outside Yellow Springs. Stiles feels the same way about being the primary caregiver for his children. Parents here are more likely to try different styles of child-rearing and operate with different family dynamics, which feels more comfortable and welcoming to both Stiles and Funderburg, a single mom.

The village has plenty of opportunities for different kinds of families to get together, talk about their experiences and watch their children teach each other all manner of things, Clark said. The play time for her child is just as important as the social time for her, Funderburg said, and this weekend’s pre-graduates party is a time to do both. 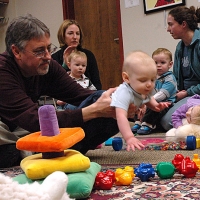 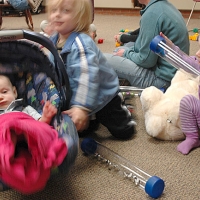 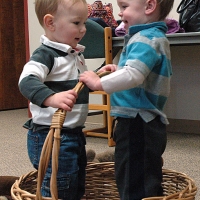 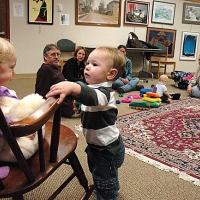