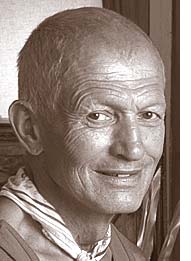 Gregory was a prolific artist for nearly 50 years. Painter, ceramicist, silver smith, furniture maker, costume designer and decorator, Greg worked in the San Francisco Bay area, Yellow Springs, Woodstock, N.Y., New York City and New Orleans. He called New Orleans home for the last 20 years, and was best known for Gregory’s Studio of Wonder, which was a New Orleans treasure until it was destroyed by hurricane Katrina.

Gregory grew up in Dayton, was a graduate of the Dayton Art Institute and part of the Yellow Springs arts, music, theater and culinary scene in the late ’60s to mid-’70s. Following the aftermath of Katrina in fall of 2005, Gregory relocated to Yellow Springs for several years, much to the delight of his lifelong friends in the area. Here, he transformed the Community Theater on Dayton St. into his “Studio of Wonder,” adorning the sidewalk and space with his magical artwork and lush gardens.

Beloved by his family and dear friends, Gregory will remain with his community through his art, love and unforgettable laugh.

Gregory’s family plans to create a catalogue of his life’s work. Please send photos of his work to jessekline@klineworks.com or charly@crescentcitycoach.com.