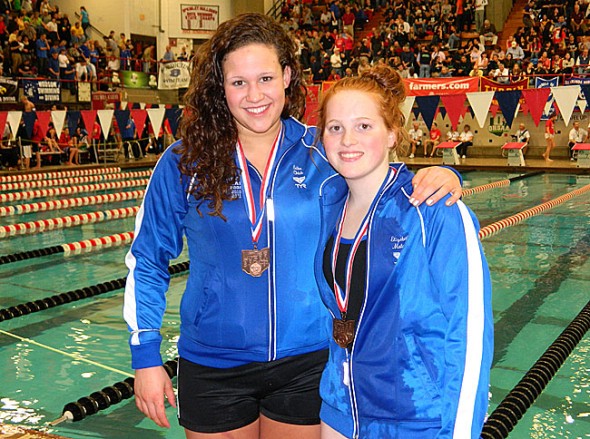 For the fourth year in a row, Chick and Malone ended their season in the final heat of the state finals and within sight of a state title.

Malone finished seventh in the 100-yard butterfly (57.55) at states after taking the district title the week prior. And Chick’s 1:54.16 finish in the 200-yard freestyle was good for seventh place. She was the runner-up in the event at districts.

Malone also swam the 200-yard medley at the state finals in 2:10.40. She finished in 10th place from the second heat. Chick almost matched her district lifetime best time in the preliminaries of the 100-yard freestyle, finishing with 53.67, in 18th place.

Together, Malone and Chick scored 31 points in their races. As a team, they finished in 19th place out of 44 participating schools.

Malone and Chick leave Yellow Springs High School holding 12 of the school’s 16 individual records between them. Four of their record-setting swims came during the 2012 swim season.

Both swimmers have scholarships to swim at NCAA Division I colleges next year. Malone will swim for St. Bonaventure University and Chick will join the swim team at Cornell University.