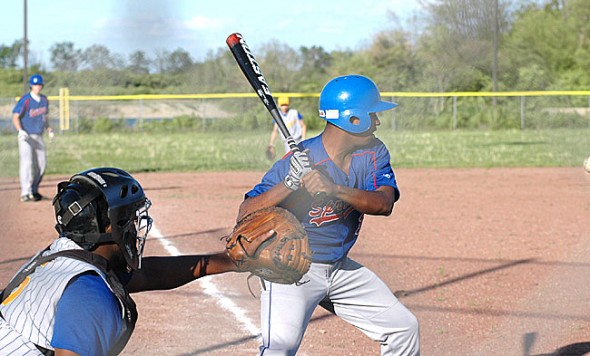 YSHS batter Eric Lawthorn prepared to knock in an RBI during Bulldogs’ 7–5 loss to Ponitz Career Center on Monday. Austin Pence, on third base, scored on the ensuing play, an in-field single. (Photo by Megan Bachman)

Angela Allen took down a 27-year-old Yellow Springs High School discus record last week by a length of seven feet. Allen’s heave of 105´3˝ at the Brookville track meet solidified her place in the YSHS record books, in addition to a first-place finish at the meet. The junior surpassed Rebecca (Becky) Wright as the best discus thrower in the school’s history.

“Allen spun across the concrete in a tight pirouette, then let the discus soar across the cold windswept field.”

Last year Allen’s toss of 92´9˝ earned her a 12th-place finish at regionals, shy of the fourth-place finish needed to qualify for states. This year, she may have a chance to be the first YSHS athlete to reach the state tournament in discus, according to McKinney track coach Peter Dierauer.

Allen acheived the feat after recently moving from a half-turn to a full-turn technique, which is more difficult, but essential to throwing longer distances, Dierauer said. The team went on to finish in fourth place at the meet. Also earning wins at Brookville were Alex Brown and Lois Miller as the Bulldogs dominated the distance events. Brown doubled in the 1600- and 800-meter runs with winning times of 5:41.1 and 2:39.0, respectively. Miller lapped the field in the 3200-meter run in 12:29.0 and then added a second-place finish behind Brown in the 1600-meter. And in a special 4×100-meter relay for the “Iron Women” of the shot put and discus events the Bulldogs came home first on the legs of Allen, Camera Cross, Rachelle Orme and Kennedy Harshaw.

Also scoring points for the Bulldogs at Brookville were Taylor Beck in the shot put with a toss of 24´3.5˝ and a sixth place in the Discus (64´5˝). The women’s 4×100-meter and 4×200-meter relay squads also added points. The 4×200 team of Niki Worsham, Orme, Cross and Allen placed fourth in 2:09.6. The foursome of Worsham, Kennedy Harshaw, Pettiford and Allen were fifth in the 4×100.

Later in the week, Brown broke the KTC Invitational meet record in the 3200-meter with a lifetime-best run of 12:12.99. And Miller took titles in both the 1600- and 800-meter runs to earn the most points for the Bulldogs. Miller led the 1600 from start to finish in a season best of 5:40.68. Then she came from behind in the stretch run of the 800 to steal victory in 2:34.57. The team had its best outing of the season, placing fifth overall.

The Yellow Springs High School tennis team opened their season last week with a grueling three-match schedule. Although the scores showed losses straight through against Xenia Christian, Stivers and Greenon, the success of the gutsy team is evident in their progress and dedication to sportsmanship and fun on the courts, according to Coach Donna Silvert.

“Our team brings very little experience, but that is shifting as novices step up to these varsity matches,” Silvert said. Nick Miller-Jacobson, Lianna Rothman, Eizo Lang-Ezekeiel, Savita Bathija, Micah Lindsey and Mollye Malone have each put together impressive performances on the singles courts, she said, adding that the doubles teams of Wade Huston /Grant Riegelsperger and Liam Creighton/David Butcher have “fought hard” and show “tremendous promise.”

Malone/Lindsey and Lang-Ezekiel/Miller-Jacobson have also doubled up successfully, Silvert said. Rounding out the squad this week were Stephanie Marion (team administrator), Mychael Roberts and Spencer Pyles.

Antone Truss continued to dominate the field events at YSHS track meets last week. He finished in first place in the high jump at the Brookville Invitational, where he cleared 6´0, and in the long jump at the KTC Invitational, with a leap of 20´1˝.

The Bulldogs finished in sixth place at both meets.

The relay teams were just shy of top-three finishes at the meets. The 800-meter team of Eli Biggs, Dylan Boczar, Henrik Korsch and Levi Perry came in fourth at the Brookville meet, while the 400-meter relay squad of Cameron Henderson, Korsch, Perry, and Bryce White took fifth. Boczar also ran well in the 110-meter hurdle competition, coming in fifth place at Brookville.

At both meets strong performances were turned in by Kalonji Cross, Connor Gravely-Novello, Devon Lewis, and Nick Whalen.

While the YSHS girls softball team lost home games last week to Emmanuel Christian by tallies of 24–6 and 20–1, the scores are deceiving, according to Coach Jimmy DeLong.

“In each game, we had one bad inning where our pitcher struggled with her control and the opposing team took advantage,” DeLong said. “When you subtract out those innings you’ll find a Yellow Springs team that hustles and plays good defense and stays with their opponents.”

In the Emmanuel Christian game, the Bulldogs were outscored 12–0 in the first inning, but over the last three innings of that game they were only outscored 7–5. Pitcher Leanne Holmes held the defending Metro Buckeye champions to one hit and two runs over the final two innings, including a scoreless last inning.

In a later game against Troy Christian, the Bulldog defense came to the forefront to make several outstanding defensive plays. Freshman third-baseman Evelyn Greene made the play of the game when she picked off a scorching line drive and almost doubled off the surprised runner at first base.

Catcher Modjeska Chavez tied a record in the third inning when she recorded three assists by throwing out three Troy Christian runners that inning. Chavez started the game in left field but was moved to catcher to give starting catcher Chelsea Horton some much needed rest. DeLong said that when Chavez looked smooth running down a fly ball in left field he decided to try her at catcher.

Oluka Okia made the McKinney school record books this week by pole vaulting 8´6˝ at the first home track and field meet of the year, surpassing the previous record by an entire foot. Okia broke the previous record of 7´6˝ held by Nathan Miller (2010) and Zane Pergram (2011).

Overall, both the boys and girls McKinney teams came in third out of six teams.

Okia then went on to win the high jump competition, clearing 5´2˝ before narrowly missing three attempts to set a new school record in that event as well. The Yellow Springs boys dominated the high jump as Kaner Butler (5´0˝) took second and CJ Johnson came in fourth (4´06˝).

The girls 4×200-meter relay team crushed the competition with a winning time of 2:04.8. The relay (Ayeshia Allison, Olivia Brintlinger-Conn, Maya Creighton and Julia Roberts) is so far undefeated this season.