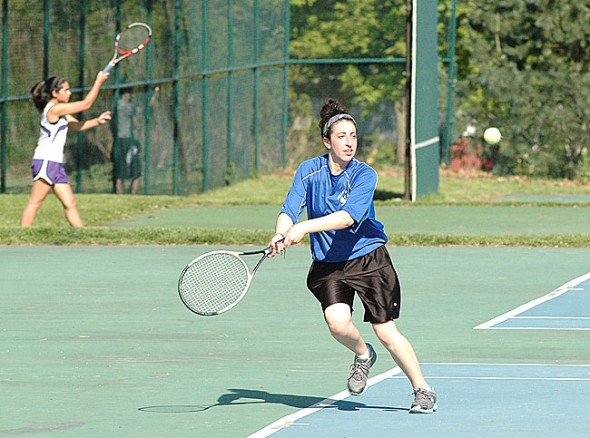 But the Bulldogs lost all three singles courts to narrowly lose the match. Singles players had to play up a spot when first-singles player Nick Miller-Jacobson got called off to serve with the Miami Township Fire & Rescue squad.

Stepping into the first singles role was Liana Rothman. Coach Silvert called her strokes during the match “beautiful and strong.” Liam Creighton and Eizo Lang Ezekiel, both freshman, had some success with deep forcing shots and tenacious play, Coach Silvert added.

Against Ponitz Career Center last week, the rapidly-improving Yellow Springs High School softball team exploded for 19 runs and had leads of 3–0 and 10–7 before falling by a score of 21–19.

Senior Katie Triplett continued her offensive onslaught with five hits, four runs scored, and six RBIs, including a double in the third inning with bases loaded that drove in all three runners.

“Katie is a run producer for this team,” Coach Jimmy DeLong said. “She has a compact swing and makes solid contact every at bat.” Triplett leads the team in batting average (.764), runs scored (9) and RBIs (7).

Freshman Jesi Worsham got on base five times and scored four runs. Batting in front of Triplett, Worsham was the beneficiary of her hitting.

Freshman Maddie Gueth made her first career start on the mound for the Bulldogs and pitched a complete game, and she also contributed on offense by getting on base three times.

The other defensive star was left fielder Olivia Ramage. Ramage set the tone for the Bulldogs defense when she robbed Dayton Christian of two extra base hits by running down two deep flyballs to left center in the first and second inning.

Coach DeLong said it was best defensive game of the year for the Bulldogs.

“The pace of this game was quicker due in large part to our solid defense this game,” Coach DeLong said. “Everybody played hard on defense and made some good plays out there.”

The softball team plays its last home game on Thursday, April 26, at Gaunt Park against Stivers. Seniors will be honored prior to the game.

The young Yellow Springs High School girls track and field team finished 10th overall out of 14 schools at the Southeastern High School Invitational last weekend. Everyone gave 110 percent efforts in the cold and wet conditions, according to Coach Vince Peters.

Leading the way for the Bulldogs with a second-place finish in the 3200-meter run was Lois Miller. Miller cruised through the first mile in 5:59, then continued on nearly the same pace with a second mile in 6:05 to finish with a new season-best time of 12:04.26. It is her fastest time ever this early in the season, according to Coach Peters.

The 4×100-meter relay team of Camara Cross, Kennedy Harshaw, Rachelle Orme and Angela Allen scored points by coming in seventh. And the 4×400-meter relay squad of Brown, Niki Worsham, Miller and Brewer completed the scoring on the track with their eighth-place finish.

In the field events Harshaw showed her growing expertise in the shot put by tossing the four-kilo shot over 25 feet four times. Her new personal best of 26´7˝ earned her a seventh-place finish overall.

The Yellow Springs High School boys track and field team placed 11th out of 14 teams at the Southeastern Invitational last weekend. The only Bulldog to place was Antone Truss who won the high jump (6´4˝) and came in fourth place in the long jump (18´9˝).

Though the weather was cold and rainy the 200-meter hurdle race was a sunny spot, according to Coach Peter Dierauer.

Roberts (Lane 8) and Brintlinger-Conn (Lane 6) lined up to run in the same heat. Both teammates had an almost perfect race, easily clearing the five hurdles and pushing each other to their best performance.

Both broke the old school record of 33.19 set by Jessica Zagory. Brintlinger-Conn finished the race in 33.12, good for fourth place, and just before her, teammate Roberts crossed the finish line in 32.95. Roberts came in third.

CJ Johnson ran an outstanding 1600-meter and placed second in a time of 5:19.81. Joe Plumer threw the discus in his first competition this year to 93´7˝ and placed fifth. Charlotte Walkey was sick all week but still finished the 800-meter run in 2:54.91 and finished in sixth place.