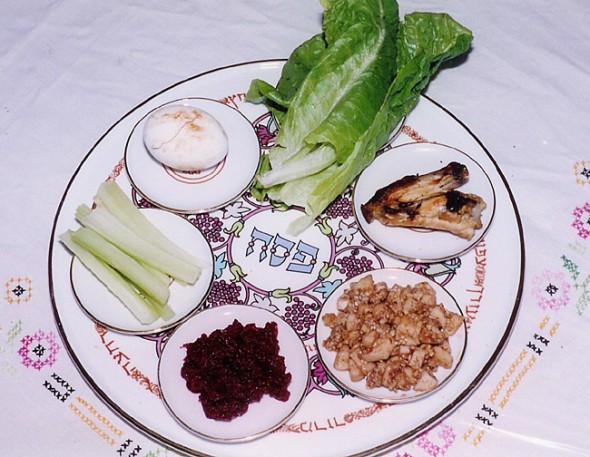 A Passover Seder plate showing (clockwise, from top): Maror and chazeret — bitter herbs, symbolizing the bitterness of slavery which the Hebrews endured in Egypt; Z'roa — a roasted lamb or goat shankbone, symbolizing the Passover sacrifice (vegetarians often substitute a beet); Charoset — apple, nut and honey paste representing the mortar used by the Jewish slaves to build the storehouses; Karpas — a vegetable which is dipped into salt water, representing tears shed by Hebrew slaves; Beitzah — a hard-boiled egg, symbolizing the festival sacrifice and roasted and eaten as part of the Seder meal. Some Seder plates also include an orange to represent those considered out of place in more conservative Jewish teachings. (Photo from Wikipedia)

The room of 20-some people, seated around a festively decorated table, falls to a hush as the voice of a 6-year old, reading, asks, “why is this night different from all other nights?”

So goes the critical part of the Seder, an annual Jewish ritual feast of Passover, where 4,000 years of history becomes the focus in Jewish homes around the world. It is at once a celebration, a lesson, and a retelling of the story of emancipation of the Israelites from slavery in Egypt.

The Seder tradition my family and I were invited to this last Saturday, the last night of Passover, was started in Yellow Springs by Ron and Phyllis Schmidt in 1971, and soon included families Schiff, Rothman, Colbert and Scott. Other families, like the Lapedes-Lynch, who hosted the evening, joined more recently.

The affair has always been a large one, by dining standards, with as many as 35 people, recounted Phyllis Schmidt. When her family hosted it, they “opened up the dining room to the living room; we were bumping up against the fireplace. And with Ron being a college professor, there were years when students who wanted to come to Seder were included as well.”

Though Passover and the Seder is very much a Jewish celebration, the core group of families pretty much come from intellectual, academic and even non-jewish backgrounds, according to Evan Scott, who has led the seder for about 8 years. His Jewish grandfather, for example, emigrated from Germany in 1931, gave up his German name and joined the Unitarian church; the family celebrated Christmas (he wrote a Christmas story every year for forty years, a tradition that Evan continues).

The word “seder” means “order”, as in the proper procedure of things, and this order is delineated in a text called the Hagaddah, which not only tells the Passover story of the emancipation but also of how and why to celebrate it. Every aspect of the Seder is rife with meanings, and the Passover story is full of epic imagery and mystery, the whole of which can threaten to overwhelm.

This is why the Hagaddah is designed around questions and answers. This particular group wrote and designed its own Hagaddah, using what they considered the essence of the story, and geared it towards the youngest of the group by focusing on questions. This questioning is essential to the understanding of the story, to keeping it relevant.

“There are many rituals that are prescribed and cherished, but what does it mean to you?,” Schmidt said. “We encourage children at a very young age to stand up in front of people, and they are encouraged to read, even if they don’t understand the words.”

One tradition, according to Schmidt, was “to invite the children first, then the adults, if they wanted to comment on anything they had to say on the service, or had any commentary on the Seder itself. Being encouraged to think and ask questions, and ciritical thinking, has its beginnings in this ceremnony. It’s just another example of how the Seder can include even very young kids.”

Evan Scott takes it even further: “Judaism built on the fact that we argue with God in a way that most religions don’t. It’s very relativistic in that effect, that people will question it, that it makes sense to us.”

And though the emphasis has always been on the children, on informing the next generation, Scott said, to him as an adult, the Seder “has always been a real comforting thing, with a Yellow Springs universality to it, the same kind of Antiochian-Yellow Springs-we’re-all-in-this-together.”

Schmidt echoed the sentiment: “We started to do it for the children, but as I’ve gotten older — and I don’t think it’s melancholy — I’ve gotten a growing appreciation for it in so many ways. If you had asked me even five years ago, I may have disowned the whole idea, but it does become a part of you, It has so many important aspects of it.”

She pointed out the last page of the group’s Hagaddah gives broader recognition of suffering and emancipation around the world and throughout time, that “the cry of ‘let my people go’ has been voiced by Jew and gentile alike, wherever they were threatened by tyranny,” that it “represents the remembrance of…memories of past persecution, and carries a message of hope and anticipation of new beginnings.”

“It’s certainly the story of the Jews — I’d hate for the religious part of this to be disregarded — but it’s also a story of freedom; we delight in the fact that this appeals not just to Jews, but Jews and gentiles alike.” she said.