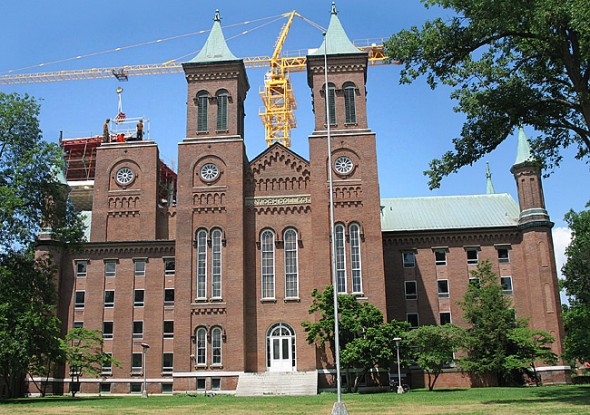 Workers finish the base of the third tower. Architects, designers and builders worked together to match Main Building's existing styles. Reclaimed bricks from the renovation of North Hall are being used for a seamless integration into the structure.

Even with all the construction going on these days at the Antioch College campus, it would be difficult to miss the capstone project of the institution’s rebirth and rebuilding: the addition of a third tower over the south wing of Main Building.

The group paused in front of Main Building at the base of the “horseshoe” to marvel at the imposing 100-foot yellow crane and scaffolding assembly, and then moved around to the “old front”, or east face of the building, where the base of the new tower is visible.

The new “South Tower”, Rosyworld said, is meant to symbolically represent the third, and hopefully final time that Antioch College has been saved from imminent demise. “There is no stronger symbol than that of a proud spire reaching into a blue sky; a new construction, yet elegantly matching the previous structure, and built for the most part using reclaimed pieces of the old,” referring to the use of salvaged bricks from the North Hall renovation.

Rosyworld pointed out that the initial two towers did not represent the two previous closures of the college. He also noted that the resulting asymmetry from the addition of the third tower on one side of the building does not necessarily portend a fourth college closure and reopening, to balance out the structure. “Three time’s a charm,” he said, and added, “heh, heh…” uncomfortably.

As the group observed the bricklayers, crane operators and scaffolding, a question was raised about funding for the project. Rosyworld pointed out that the College had received a significant amount of money through the recent liquidation of YSIGH stock, as well as though the sale of very expensive organic sprouts, eggs and chicken parts from the Antioch Farm.

The College is also realizing further savings, as some students have chosen to do their co-op work on the construction. “It’s a dream come true,” said Dusty Maypole, a student who has been working on the renovation of North Hall. “First, a full scholarship, then a co-op job. It’s only a matter of time before I can climb up into that structure with pride and ownership and throw acorns down on passersby, unseen.”

Construction of the tower is slated for completion by the fall of 2012, in time for the arrival of the Class of 2016. The building, however, will not be open for use by that time because of the extensive interior renovations needed.