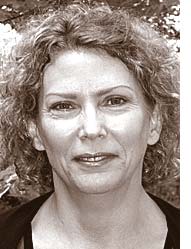 As a Village councilor and the Chamber of Commerce director, Wintrow constantly brainstorms ways to improve the local business climate, attract more tourists and strengthen the Yellow Springs community. But she also spends time thinking about how to better the Dayton region as a board member of the Miami Valley Regional Planning Commission, the Dayton area’s federal metropolitan planning organization. For that work, Wintrow received the group’s annual Regional Stewardship Award last month.

“Karen has always had that regional attitude towards all solutions,” said MVRPC’s executive director Donald Sprang in a recent interview. Wintrow, a Dayton native, has been instrumental in the group’s ability to solve regional problems amidst parochial issues, Sprang added.

“Some people just focus on the issues of their community, but we all have to live together and make decisions together,” Sprang said. “We’re all part of the same area.”

Wintrow officially represents the Village of Yellow Springs on the 78-member MVRPC board, a position she’s held since 2006. Wintrow said in a recent interview that it’s important for Yellow Springs to have an influence on the group in order to obtain funds and help lure businesses here.

“If we’re trying to attract jobs in Yellow Springs, our strength is in the region,” Wintrow said, since companies typically look at the regional workforce and cost of living characteristics. MVRPC has facilitated funding for local infrastructure projects such as the Northern Gateway bicycle connector project and the Center for Business and Education.

And even though Yellow Springs is on the far eastern edge of the Dayton region, many villagers work in Dayton or visit the city’s cultural attractions, Wintrow added.

“We’re definitely more tied to Dayton and will be,” Wintrow said. “I don’t know if we could go it alone — there are benefits to being part of this region.”

Wintrow was also a member of the steering committee that developed the “Going Places” vision, a 30-year land-use plan for the region that lays out ways to grow more sustainably. Since it’s typically cheaper to develop new land, “Going Places” identifies ideas and incentives for redeveloping existing properties and brownfields and preserving farmland, Wintrow said.

According to Laura Loges, director of marketing at MVRPC, Wintrow was a key leader in the process of writing the “Going Places” plan because she wasn’t shy about speaking her mind.

“She brings things to the forefront that sometimes other people are thinking but are afraid to say,” Loges said. “It’s good because we start thinking about of a lot of things that we didn’t before.”

Wintrow is also on MVRPC’s 20-member executive committee and has served on its Human Services Transportation committee and Recreation Trails committee. Plus she’s on the board of the Greene County Visitors Bureau, which features the village prominently in its marketing materials and was responsible for nominating Yellow Springs for last year’s Rand McNally “Best of the Road” competition.

Even when Wintrow isn’t attending meetings — in Dayton, Yellow Springs and Xenia — or directing the local Chamber of Commerce operations from the Train Station, she is still thinking about how to promote Yellow Springs, sometimes shooting off e-mails in the middle of the night. Recently her work seems to be paying off as crowds have been packing downtown on the weekends, local businesses are pleased with sales and more young families are moving to town.

“It’s coming from somewhere,” Wintrow said of the recent positive developments. “I’m not taking credit, but it’s nice to be around when it’s happening.”

Wintrow attended E.J. Brown School in North Riverdale, Northmont High School in Englewood and later lived in the Oregon, McPherson and Grafton Hill Historic Districts of Dayton before moving to Yellow Springs in the early 1990s.

“I feel a loyalty to Dayton,” Wintrow said. “It has a lot of strengths and there is a real sense of cooperation and collaboration right now.”