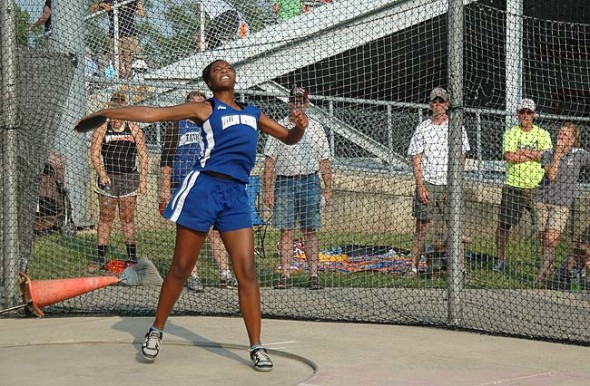 YSHS junior Angela Allen launched the discus 10 feet further than she did at regionals last year, but still came up short of qualifying for the Division III state finals. Allen’s best toss of 102’11” earned her ninth place at regionals. Visit www.ysnews.com for more photos from the meet. (Photo by Megan Bachman)

Girls track stars have next year

The season ended one week too early. for the athletes on the Yellow Springs High School track and field team. But while their performances at last week’s regionals didn’t earn them a trip to this week’s state meet, they’ll have another shot next year.

Junior Angela Allen’s second bid at states in discus ended short of her goal, but Allen improved upon her performance last year by a full 10 feet. She finished ninth with a best effort of 102’11”, which put her in the event’s finals.

Junior district champ Lois Miller missed another chance for a state appearance with a 12:20.28 run in the 3200-meter, in seventh place. Miller competed at the state meet in cross country as a sophomore.

Junior Alex Brown, who last week earned the district title in the 1600-meter, ran the event at regionals in 6:02 to finish 13th. And the girls 4×800 team of Miller, Brown, Nicole Worsham and Christina Brewer finished in 10:59.52 and 13th place, also shy of qualifying for states.