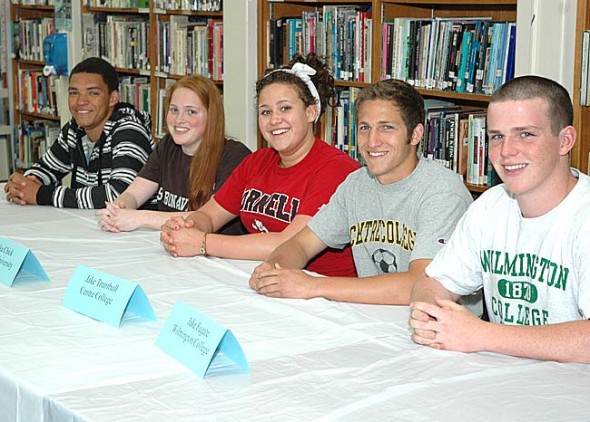 The game goes on for six Yellow Springs High School senior athletes who will play their sport at college next year.

In fact, more than 10 percent of this year’s graduating class is taking their game to the next level, according to YSHS Athletic Director Steve Rossi.

“For a school of our size that we have that many kids moving on to college is incredible,” said Rossi at a signing ceremony last week.

Even though Fugate played one football game in his last two years of high school, he managed to score a spot on the Wilmington College team. Fugate played hard when he had the chance and never gave up, according to his junior high and high school coach, Craig McCann

“He’s gonna do great next year,” said Coach McCann. “He’s always been a beast and played with reckless abandon,” he said, adding that Fugate can play any position on the field, from running back to strong safety.

Fugate played two full seasons as a freshman and sophomore before football at YSHS was cancelled at the start of his junior year and after one game his senior year. Fugate admitted at the ceremony there were times he wished he could’ve played more high school football, but in the end was glad he stayed at YSHS.

“Looking back I wouldn’t choose anywhere else,” he said, adding, “I look forward to proving to everyone I can play football.”

Truss, a track athlete who hopes for a state appearance this year, will also play at Wilmington College. Last week Truss secured his spot in regionals with district titles in both the high jump and long jump. (See this week’s Bulldog Sports Roundup).

Truss said Wilmington College plans to use him for the high jump, long jump and triple jump. For himself, Truss looks forward to continuing on in a sport he loves.

“I like the competition, that you get to meet individual people, get to travel around and you don’t have a game clock,” Truss said of field events. “You can compete with yourself and not have to worry about anything else.”

Track Coach John Gudgel said Truss has always been a hard worker and student of the game.

“What makes him good is his athletic ability with his technical understanding,” Coach Gudgel said. “He’s learned what it takes to be successful.”

Felder Jr., two-year team captain of the YSHS basketball team, will play at Clark State University the next two years with hopes of moving on to play at a four-year year college thereafter.

Felder Jr. was a district-15 all-star and selected to the Metro Buckeye Conference’s first team as a senior. A point guard with impressive ball skills and a tough defender with 1.7 blocks per game in his senior year (second in the conference), Felder Jr. was contacted by Wilmington, Wittenberg and other colleges before deciding on Clark State, where his mother, Theresa, works, to improve his game.

“It will help me mentally and physically and with getting bigger,” Felder Jr. said of playing at Clark State. “I’m just going to work as hard as I can.”

Chick and Malone said at the ceremony that even though they had four coaches in four years on the YSHS swim team and the team ranged in size from four to 12 swimmers, they had positive experiences at YSHS.

Trumbull thanked his coaches, Jim Hardman and Ben Van Ausdal, for their help, and praised the role of athletics in high school.

“Athletics help with education because you can get your mind off of stuff,” Trumbull said.